Since I've started this blog, I have posted tales of my journeys to sex clubs and sex parties. But I don't recall ever blogging about more than 1 visit to a particular sex club or party, even if it's one that I have been to more than once. So this post may be a first.

I went to another Hot Jock party this past weekend. I wasn't going to go at first, because I have never gone to a party 2 consecutive times. It's my little hang-up about not appearing desperate to get laid. And it wasn't about that at all, because I have some guys more than willing to hook-up with me right now, and the feeling being quite mutual. My trip this time was more of an ego trip. I was sure word got to the organizer about my blog, and when I arrived, I discovered that it did. So once I got that ego stroking, I could have easily walked back out the door, because I got most of what I came for. I could have then just waited a few hours, then went to hang with my friend, Andrew who works at The Cock. But when I see cute guys with nice bods walking around in the undies, why would I want to leave so soon? Needless to say, I dropped trou, and hung out for a bit.

As time went on, a couple of my blog posts came back to haunt me - but in a good way.

First, I was fooling around with a blond hottie, and this other guy joined us. This other guy was hairy, bringing to mind my recent post about not shaving a hairy man. Thick eyes brows, hairy from his chest to his crotch, with a great ass. During our 3-way makeout session, I did get to bury my face in that bush of pubic hair while sucking his dick. I actually saw him when he first walked in, so this opportunity to fool around with him was very much welcomed. At one point, he left me and the blond, and right next to me, I got to see this guy fuck that cute ass of his. I definitely copped a feel of his ass bouncing while it was getting pounded. That wasn't the only time me and this hairy guy crossed paths. I get to our next encounter later on.

The next blog that haunted me was about my wanting to see Asian studs in more American-made gay porn. I witnessed some Asians top a couple of guys royally that night, and once again got the privilege to experience one's sexual prowess 1st hand, thereby proving my case made in those blog posts. A couple of Asian guys seemed to walk in together, then they went and did their separate things. One of them stood there looking at all the action, and had an amazing body. I made my way over to him , and he immediately took to me. He pulled out his cock, I played with it for a bit, then I couldn't contain myself. I had to suck it like a baby with a pacifier. He was already getting hard, and I made him totally hard. He got a condom, and I bent over ready to give the guys a show. One that undid 2 moronic misconceptions:(1)that Black guys are always tops, and (2) Asians guys can't top because of their little cock. Well there I was (a Black guy)bottoming for an Asian with a pretty nice sized cock who gave it to me doggy-style, and everyone standing around watching was getting off on it.

Bottoming for all them to see must have done something, because after that, some of the White guys who already saw me all of the sudden seemed to find me approachable. They probably left me alone before, because they were tops. If that's the case, I guess some Black guy had to bottom since the other Black guys there, as far as I saw, only topped. So if I had to only bottom for the sake of undoing that misconception, then it was worth it taking one(or in this case 2) for the team.

That second cock came later on, when me and the hairy stud crossed paths again. This time, 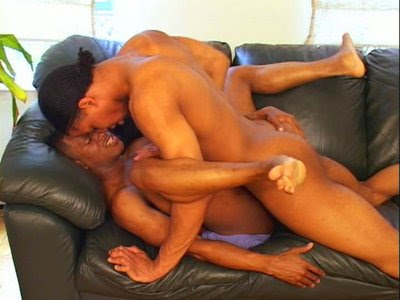 I was standing there, and he was walking by and I thought he was going to walk past. Instead, he stopped as soon as he got next to me. He started feeling me up, I stood in front of him grinding my ass up against his semi-flaccid cock. I knew this was making him eager to fuck me, because once his cock got totally hard, he started slapping it against my ass, and sliding it up against my crack. As preparation, I had put a few condoms in my sock before entering the room. I reached down for one, and gave it to him. I laid down on the bed, because I was longing to be in missionary position before the night was over so I could squeeze some ass while getting fucked. And he did not disappoint. Just as I mentioned loving the feeling of that pubic hair hitting my ass, his unshaven pubes definitely satisfied me. Of course that was second to loving the intensity in which he fucked my ass. And I returned the favor by showing exactly why I like my tops to have a nice ass. I massaged his hot ass while I fucked his cock with my ass - and he loved it. I get off on making tops say "Oh yeah, give it to me", instead of ONLY moaning while they work my hole.

If you think my night was done, think again. I fooled around with another phenomenally fit Asian there who had a nice smooth round ass that I would have gladly either fucked or groped while getting fucked. I actually asked if I could fuck him, and he said he didn't really want an audience. He was right to think that would have happened, because the pounding I would have put on that sweet ass would have definitely drawn loads of attention. And speaking of "loads", that's what he wanted from me. He said he wanted to come, and he wanted me to shoot my load on him. So he sat on the bed with me in front of him, jerked off, and when I saw his load sprout from his cock like white lava from a volcano, I shot mine right after. And it was a pretty good load, too. Between all of the watching hot sex and having great sex, my balls had build up a pretty decent amount of cum. So this guy's torso was white from both of our loads.

If I go again anytime soon, I don't expect to have another tale to tell. But when I saw those blogs flashing in my mind because of these hotties coming up to me, I had to tell the tale of that night. At least, those blogs haunted me to react with a smile by knowing that I was right in what I said. Well, if a blog entry is going to haunt me at a sex party, I'm glad what I said in it played a part in getting me off by getting other's off.

Posted by LeNair Xavier at 9:47 AM