The Real on Why I Hate Poppers

If you follow me on any form of social media, then you know that I have made it no secret of my great disdain for poppers. Well, it is one thing to have a disdain for something, but it becomes a stance of arrogance to refuse an in depth explanation for that stance.

I was told that my calling partakers of poppers ignorant was me shaming them.

I’m sorry, but I am supposed to think that I said something wrong? For I pride myself on seeing the big picture on a matter before speaking publicly about it. Plus, when I say anything against poppers, I am talking to adults. Adults who should know better than to intentionally hold a bottle mere millimeters away from their noses to sniff. Especially since that bottle houses amyl nitrates — a chemical that if ingested any more directly (like swallowing) can result in immediate (and possibly fatal) harm to the body. Such as this doctor’s quote from a Vice article shows:

“It is not thought that amyl leads to many long-term issues, but there are some short-term risks,” Dr Boylan says. “It is possible to develop an allergic reaction over time. Another rare but serious complication is methaemoglobinaemia, which means the blood becomes unable to carry oxygen. This can be life threatening, and it happens when a person swallows rather than inhales poppers.”

Am I really supposed to coddle adults who should have the common sense to figure out just a smidgen of this information?

Take note that the person who accused me of shaming was a cis female. She does not live with seeing this ignoring of common sense repeated in her community ad nauseum. Unlike me, who sees it repeatedly since the gayness in my bisexuality has me way more so in the gay male community. Hence why I made it my topic for that event.

I feel no wrong in shaming in this instance. For if a parent is any degree worthy of the title of “parent”, then there are instances in which teaching the difference between right and wrong requires shaming you for doing the wrong. Plus what other choice does one have when common sense is often met by many popper users with an addict's aggression to defend their drug of choice. So real educators, ones not marionetted by corporate bottom lines are left to pick up where too many "gay parents" have fucked up.

Before we go any further, know that I have survived over a decade of contemplating suicide because of not owning my orientation. I did not survive and endure all of those days and nights of angst to finally come out, bottoming, then delude myself into thinking I’d be cooler if I became a substance abuser by doing poppers. Hence why I make no secret as to how since my coming out, my enjoyment of anal sex has led to me being tag-teamed by beer-can thick dicks, double-penetrated (more than twice), practically gangbanged, and still get compliments on having a tight hole. All without poppers.


My dislike of poppers is more about me wanting what every person engaging in sexual intercourse should want — — to be the center of my sex partner’s attention.

If I’m to share my sex partner’s focus, I want it to be with another human being if we’re having group sex. I don’t like the idea of sharing that focus... with a bottle? A bottle as much as 35 times shorter than me and containing a harmful substance. So the frustration that has come through much of what I’ve written about poppers over time is my concern as to why more gay males don’t want the same for themselves. And gay males are already prone to self-esteem issues as an oppressed community. So the use of poppers in my eyes becomes an acting out over those issues. 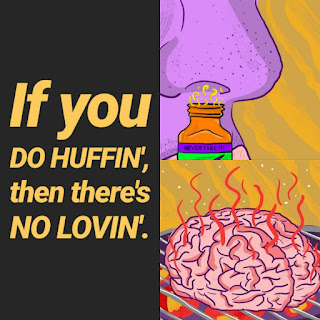 I find it to be absolute insanity to allow anything to interfere with that sensation. To the point that I will not date a guy who does poppers. So while some white/light-complexioned guys treat medium/dark-complexioned guys as being “good enough for a lay, but not to stay”, that’s how I treat guys who do poppers. And I feel no shame about it. For at least my discarding of such guys is based on a health-conscious decision. A behavior they can change if they choose to. Unlike the aforementioned white/light-complexioned guys whose racism and colorism makes them discard you over natural traits like darker skin and almond-shaped eyes. Therefore, beyond your control.

I personally get highly offended when I either see online profiles of guys claiming how they “can suck dick all day by doing poppers”, or seeing the actual action at a sex party/backroom by a guy on his knees sucking every dick around him and interrupting his suck with a huff of poppers. What offends me is how such a guy is lying to himself about his love of oral sex. Anyone who claims to “need” poppers to better their endurance of oral sex is telling themselves a lie.

I’m sure some feel that I owe no one this explanation. After all, the term “poppers” alone is illegal is some places because it shows illegal intent to use amyl nitrates by huffing. Even XTube is aware of this fact. Hence why I had to change the title in the description for my XTube video embedded in “Poppers! We Don’t Need No Stinkin’ Poppers!” For XTube has outlawed the use of the word “poppers” on their site. Even if the purpose of the word is to eradicate poppers itself.

With all this, am I bragging? In order to get the message through, YES. 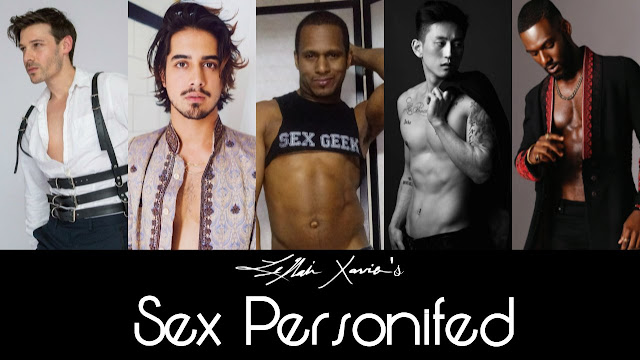 What makes a man "sex personified"?

Well, before I give my answer, to prove that my including myself in the above collage is not me being arrogant thinking I'm all that, let me recall what happened to me to make me consider the reality of such a thing, and start seeing it in others.

You see, I don't try to court guys at a bar/club known for hook-ups when I know they are with friends. That's because it is often the case that they are either looking out for the friends, or following the lead of the friends. Which in turn makes those friends become the biggest cock-blockers. And this instance might not have been any different.

For as I said, I was dancing all by myself. He was with the females about 4 - 6 ft. away. Then my peripheral vision saw him starting to approach me. I was hoping that this was him making the 1st move. Once he got right by me, I turned to look directly at him. He then initiated speaking by saying...

"YOU ARE SEX! You're like,...", while looking me up and down as in awe, he concluded by saying, "...the whole thing! You are just so beautiful. I had to say that to you."

I smiled and thanked him, and then he just simply turned around and went back to the 2 females he came in with. Never saying another word to me. So I'm left standing there thinking, "Uh,... what the fuck just happened?"

Because he left me so bewildered, I never took what he said to heart. I just thought of him as a drunk Euro boy who made himself dismissable by being drunk. Then things started to happen in my life to make me more aware of my sex appeal. Things that made me have to wonder... why did he just break from his group like that, say those words to me, then walk away? In his eyes, was my beauty, or my aura that striking that it compelled him to do that? If there is any truth to the saying, "a drunk man's words are a sober man's truth", then the answer is YES. And there have been numerous instances since confirming it.

And even today, I will get on the bus or train, and walk in the door to see sometimes males, sometimes females, and sometimes both... stop and stare at me in adoration. Or see a guy being arm and arm with his girlfriend or wife. As I'm in my spot listening to music, reading a book, or just being to my thoughts, I'll suddenly feel eyes on me. Then in my peripheral vision, I'll discover that those eyes on me... are from the guy from the straight couple.

He'll be looking me up and down. Making a full assessment of me from head to toe. Then out of guilt, start a public display of affection with his female partner. OR his woman will start some PDA knowing good and darn well that she'll never confront him about checking out a man.

As stated before, this is not me being arrogant. This is just me being observant of people's actions around me, and when I've unsuspectedly have become involved in those actions. Plus, if I was arrogant about this, I wouldn't me willing to admit and admire that there are others who seem to have that same kind of presence.

The presence that makes a man (or woman) sex personified. Someone having a sexual aura that makes sexuality come to the forefront of many minds as soon as that person walks into a space. Consuming the admirer to the point that the admirer considers crossing their taught boundaries of color, ethnic preference, or even their degree of straight or gay.

It is a reality, and that is where the poem "Sex Personified" is born from.

Posted by LeNair Xavier at 12:14 PM No comments:

This is the tweet from Thunder Woods that started it all: 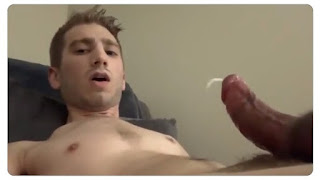 So that's enough backstory. Sit back and enjoy the ride of watching me ride. 😉

Posted by LeNair Xavier at 6:37 PM No comments: