Sex parties to celebrate Gay Pride! Not at all a new concept. And not at all an unwarranted one. After all, one of the aspects of Gay Pride to be free to have sex with whichever gender you want without persecution. 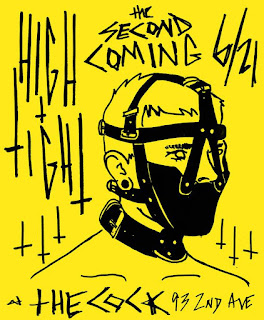 With that however, comes a responsibility to each other. Such as not behaving in a way to make your fellow man feel less than. Especially, over a natural occurrence such as skin color. Well, it seems like the most white and light Latinos at High + Tight: The 2nd Coming didn't get that memo.

At first, I thought it was just me. For everyone who is often approached and flirted with has an off night, and vice versa. But I felt an ugly energy in the air there. The ugly energy of sexual racism. An ugly energy I forgot about feeling at the last High + Tight party because it was such awhile back. So this night  caused a flashback.

However, since I didn't want to be right about my criticism, because that was then, and this is now, I used the one tactic that would prove me right, even though I wanted to be proven wrong... I looked at other Black males in the room to see how they were fairing.

I disappointingly discovered they were also being rejected. To be more exact, Blacks and Asians there were about 95% of the time either treated like they were invisible, or they were used as ego-boosting strokers and fluffers, then discarded. But seldom did anyone have sex with a Black guy there.

While it's an ugly ploy, it is an understandable one from these creatures. As I said in a recent comment to an article on NewNowNext, many gay white males are incredibly insecure. Not a surprise when you're put on a man-made pedestal, especially a racist one. You make every other color feel "less than" so they won't contend with you always being in fear of falling off that pedestal. However, the white guilt of life on that pedestal makes those controlling media make us Blacks into sexual superheroes. This doesn't excuse or lessen the ugliness of using someone solely to stroke their ego out of some racist jealousy. So let's leave Karma to deal with them on that.

This idea of using someone of a certain color, ethnicity, and/or body type only as a stroker or fluffer, but not as a sexual prospect is an ugly common practice among those endorsed as epitomes of beauty by gay media, porn, and nightlife. That means white, light-skinned Latinos, and gymrat blacks. With the commonality of which color does it most often being in that order. Seeing many white guys do this is over and over and over again at NY Jock Party/GBU events is why I stopped going there. So if High + Tight promoters that get their shit together, they will be the next party I suggest being on my Miss List.

In short, such behavior at High & Tight shows its name should be changed to "Racist & White". Therefore, instead of it having a "2nd coming", it should have stayed gone.


Well, I'm glad to say that the next night I went to CumUnion. And based on my experience there...

CumUnion picked up where High + Tight fucked up!!!

For early on, unlike at High & Tight, I saw guys of all sizes and colors getting action at CumUnion. Sure, there were some who were still assholes. In fact, I saw a few guys from that High + Tight party at this CumUnion party. But overall, this crowd showed itself to have someone for everyone. And in a city as diverse as New York City, such a crowd shows that a promoter is doing their job. They're not catering to their little clonish clique with a Pre-Civil Right Movement color approval rating as to what is sexy. An attitude that was all too evident at High + Tight. Hence why I wrote this Facebook post that Saturday:

NOT IN A PARTY SPACE IN MY CITY!!! Thank you.