When I first read Mason Wyler's post from October 5th on his blog Wyler Nation, I was hoping this was a sick joke that I could be pissed at him for playing on readers when he admits it's a lie. Unfortunately, I must report that on his Ocotber 6th post, he confirmed that this story is sadly very real. Mason Wyler really was gang-raped.

Some comments say that his story is a hoax. If so, it's a cruel one to play, but a lesson can still be learned from treating it as real nonetheless.

It's stories like this that are the reason why if I do venture to websites like Manhunt and have an exchange with someone, I don't make either one of our homes the initial meeting place. I've always had that rule, but on 3 occasions I did meet up with someone, I didn't stick to it. Since I've left from those instances with only memories of pleasure and none of harm, I think it best to not tempt fate. Because all it takes is 1 time for something this bad to happen.

I am more than aware that once you leave that public place with a stranger, something as bad as what happened to Mason Wyler could still happen. But my feeling is why greaten your chances of harm by not being in a public place and conversating with the person first. You see, I never make my hook-ups be about knowing the person ONLY sexually. I always learn something more. That public meeting lets me read their eyes, body language, and in between the lines of what they say.

Right now, I have possible hook-ups from guys I've had email excahnges with on Friskylist.com and DList.com. And I'm proud to say that I have stuck to my guns and said, "Let's meet in a public place". While none of those possibilties have yet to come to fruition, I'm in no rush, and it shouldn't be such a rush that I break that rule.

Some may say that Mason is young, but there are people twice Mason's age and beyond who would make the poor judgement of inviting a stranger they met through the internet into their home. But before I go any further, I must make clear that I don't feel that his poor judgement makes what happened to him totally his fault. Those animals attacking him was their own fault that they must answer for, be it by the justice system and/or bad karma.

Who could blame Mason (especially as public persona) for making that mistake with his first and foremost motive of inviting someone into his home being to get his wallet returned? I'm sure most of us could have made the same mistake with the possiblility of getting our missing wallet returned being on the line. Making out or hooking up with that supposed good samaritan would have been at least a secondary thought, if at all.

What moves me to feel so bad for Mason Wyler is of course (1) sheer human compasion, and (2)I am a fan of his. I'm probably a fan because he looks like a double of a young, blond Southern trick (from Kentucky) I had a few years ago. I even blogged about that tryst in Mason Wyler Doppelganger.

In Mason Wyler's latest post, he seems to have learned from his mistake in judgement. I just hope that he heals well from this situation. Not just physically, but more importantly - mentally and emotionally. 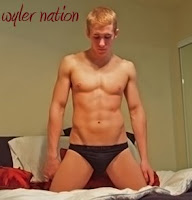 So to Mason Wyler - all our hopes are with you.
Posted by LeNair Xavier at 12:01 AM