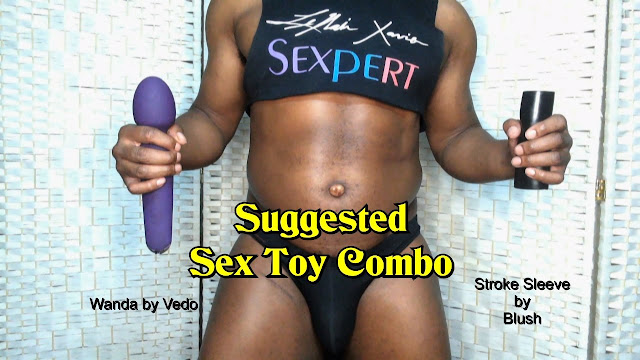 Now that you know how this sex toy combination came about, witness it working and see the end results😉...
Posted by LeNair Xavier at 5:42 PM No comments:

Whoever I would approve of, with the exception of being in love with me, the guy playing Zen Massif would have to be a great deal of a real-life version of him. Firstly, he would definitely have to be sexually attracted to me. Because I refuse to fake the chemistry. Also, the guy would have to have shown his bisexual pride by being an out and proud bisexual. He cannot treat his straight or gay side like each side is on a half of a flip-switch. With that side it flips on being triggered only by the weight of dollars placed on it. Instead both his straight and gay side are triggered by the weight of the his prospective sex partner's sexual spirit.
The only way the porn actor can mentally and sexually differ from Zen is how his bisexuality does not have to be predominately gay like Zen and myself. He could be a predominately straight bisexual. Having just enough gay and a lust for me to fuck my ass into oblivion for all the world to see---at least twice.