In 10 days, I will be 45 years old. In both mind and body, I think I've maintained myself quite well. And based on my sexual experiences, I've done quite well in that department as well. Speaking of sexual experiences, I don't know a man alive that doesn't want sex for his birthday. Well, I am no different. Now, while I will take a good old-fashioned roll in the hay with much gratitude, there are some sexual occurrences that would make my gratitude even greater.

Double Penetration
Now, I have asked for this on this blog for years. And those who offered either did so unexpectedly, or was offering a component I expressly said I didn't want for my 1st d.p. (like one guy with a huge cock).

Of those unexpected offers, my experiencing being a double penetration bottom has happened. However, while I'm over 90% all for spontaneity, this was a case where the spontaneity left me too partially fulfilled. Because I was fulfilled by the fact I can say I experienced it, but that's where the satisfaction ends. So I want a do-over. One more along of the lines of what I stated in my blog post where I figured out the D.P. formula that would work to my satisfaction.

Let me add, a stipulation just in case I find myself unable to handle both cocks presented to me simultaneously. In such a case, I'd bottom for both guys separately. With the one to get me first being the guy who I have never had sex with before, or it's been the longest since we last hooked up.

Now, in case you don't know by now, I don't pride myself on how much sex I have. Instead, I pride myself on what I learn from my sexual encounters. And part of what I would like to learn is if there is any difference is a guy's sexual styles based on their ethnicity. Well, due to the different ways different cultures teach their males about sex, I'm sure there is for most guys but not all. And an international gangbang would be a great way to get some (but not a concrete) answer, and have fun while doing it. Don't you think?

BiSexual 3-Way
This might gross out all of the infantile hetero-phobes reading this post, but I have long wanted a bisexual guy to fuck a woman, and with his cock wet from her pussy juice, for him to then fuck my ass. And while he's having sex with the woman, allow me to feel his body.

Well, since I don't know too many hot bi-guys, this is a kind of birthday sex that is a real longshot.

Unrequited Lust
There are many guys living in NYC who are on my social media lists who I wouldn't deny a roll in the hay with. And many of them already know who they are. And in case they don't know, here's a tip:

If I've groped your ass, crotch, or sucked your dick, you're more than likely a contender.

With these 3 possible scenarios, there's one I have no problem with revisiting....

I have no problem revisiting this situation if the previous 3 don't happen because one of my followers favorite home sex videos come from a guy I met that way....My playmate from "Why It's WE Fucked".

I went out arriving at a bar a tad before midnight. Upset because a former fuckbuddy wasn't reciprocating my advances for the great sex we were having to also be a gift for my birthday. So I went to the bar, not on a search for numbing sex, but to not stare at the walls of my apartment where that sex would have happened had the former fuckbuddy responded accordingly. So I went to the bar backroom to do my usual study of sexual behavior, and noticed one guy who went down on me. While that guy was going down on me, I noticed this other guy who had someone going down on him. We noticed each other, but trying to be loyal to the guy already blowing me (who was lackluster at cocksucking), I tried to ignore this possible new suitor. But he was persistent. Then by chance, we wound up closer to each other. It was likely because the guy who was blowing him had stopped, and was trying to back his ass up on my new suitor. My new suitor wasn't having it, and when the guy blowing me stopped to take a breath, my new suitor took me away, and we wound up fucking my ass right there. And it is very likely that at my time of birth, 2:57 AM, this guy's cock was in my ass.

So that night was HAPPY BIRTHDAY TO ME!!!!

With such options listed, I wonder which one will come to fruition? And if one does, who will I have to thank for the smile that will be on my face. Only the morning after will tell. Until then...
Posted by LeNair Xavier at 2:52 AM No comments: 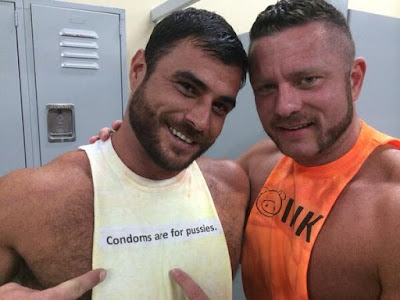 Reading that made me feel the need to reiterate my ongoing stance on bareback sex, and why I feel that way.
A term like "anti-condom ambassador" brings to mind the hashtag #BBBH (BareBack BrotherHood). A hashtag I may have used to get the attention of those loyal to that hashtag, but I have never defined myself by it. Nor should you, unless you practice barebacking, are HIV+ , and know your prospective playmate is also, OR you're HIV- , practice barebacking, and just before your hook-up, both you and your prospective playmate just got rapid test reading negative. Otherwise, why would you define yourself that way? Or as an "anti-condom ambassador"? Defining yourself by such terms and not conveying it to your prospective playmate tells me that not only are you a massive risk-taker with your own life, but you do the same with your partners as well.
And with that, plus the pedophilia encouraged by porn films (like those by Nica Noelle), look where that got Mike Dozer.
This is definitely a judgement of barebacking, but not in the way you might think. For even though it was "fashionable" to do so at the time, while I was doing studio-based porn, I never publicly bashed barebacking, nor did I condone it. With that in mind, there was no way you would have found me being one of Chi Chi LaRue's hypocrisy brigade bitches with her hand up their ass screaming "Shut your hole!" 5 years ago while they have profiles on barebacking hook-up sites. So I was glad to be too Black (and too individual enough) to have never reached the height of porn-stardom to have even been asked.
My stance on barebacking has always been that it's a matter of choice. This is me repeating myself to my long time readers, but I've long felt that condoms are unnatural, because there should not be a barrier between you and your sex partner. HOWEVER, we must consider using condoms because of all of the STIs one can catch. So if one (myself included) gets infected with anything, he should be a man and accept those consequences.
I have long gotten flack for this position on the matter. In fact, during my discussion "Gay Porn: Teacher, Indicator, or Both?", when the issue of barebacking in gay porn came up, I expressed this position, and got into a heated exchange between a guy in the audience claiming to be a counselor. He seemed to have gotten so heated that during the intermission a few minutes later, he never returned. Although, that was before Truvada being used for PrEP was not so widely known or accessible. So even though I didn't need others supporting my view to validate it for me then or now, I'm sure I now have more supporters on my stance.
Anyway, I've admitted to barebacking. I've admitted that some of my homemade videos are barebacking videos. But I am not so loyal to my feeling that condoms are unnatural that I'm not going to take precautions with strangers. However, there have been occasions where I have barebacked with a stranger. Hence why I'm not a harsh judge of someone who is usually firm on condom use, and having a slip from their regimen. For sex is meant to be spontaneous. So what I am critical of is a condom-user who falters, and tries covering it up by publicly giving harsh criticism to barebackers, while never once publicly admitting to their personal misstep in their sexual practice. That's why you should never trust someone that critical of someone who barebacks. They're often epitomizing the old saying..."Doth protest too much".
What has prevented Mike Dozer's story from becoming my story is the fact that I have never gotten so caught up in the turning a blind eye and false sense of sexual entitlement bestowed upon porn actors that I've lost my sense of what is morally right and wrong. Or my sense of what is right and wrong in the eyes of the law. Fooling myself into believing that there are no consequences for my actions. And that is what you have in all areas of Mike Dozer situation. From his pursuing a minor to his attitude towards condom use. To the point he could proudly wear a t-shirt that says "Condoms are for pussies."
All one can do is shake their head at that.
Posted by LeNair Xavier at 8:29 PM No comments: