Muscled Cocks And Ass From The Past, Part 2

In a recent post, I told of how I went to a NY Jock Party and had this big muscular hunk, fuck the shit out of me, and almost made me no good for someone that I saw there from my past who was of enough quality that I left with that person. Well, you were not fooled by the title, because while as promised this day's post is the conclusion of my "Sexual Awakening Anniversary:Lucky 7" series, you now have a clue of who that person from my past is. But first, let me tell you what led to that point.

I was walking around after the sweet pounding from the muscled hunk, and saw this face. A familiar face I've haven't seen in years, but was still hot as fuck - if it was really him. A tall, slim Asian cutie, that just walked by me not even noticing me. I figured that at some point soon we would wind up in close enough quarters where he couldn't help but notice me, if he was who I thought he was. But I felt no need to push it along, because I wasn't desperate for a reunion. I just thought it would be fun.

Not too long after, I this tall fit European came over to where I was playing voyeur. He stood in front of me with his back to me, and decided to back that thing up - right against my crotch. He was wearing a jockstrap, so when I looked down, I saw a pair of beautiful White buns with softness that felt like a sweet cushion against my jock-covered cock. And he cause my cock to grow more with every grind against it, to the point that I had to let my dick out of my jockstrap. I had to let my raging hard-on rub bare skin-to-skin against those sweet, juicy butt cheeks before I got a condom to stick my dick in between them to get engulfed by the warmth of his hole.

I fucked him in 2 different positions and places. He first laid on what looked similar 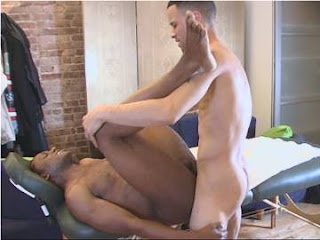 to a massage table. We wound up looking like a reversal in positions of my scene in "Dillon: The One". Soon I knew I had to stop, because if I kept going, I felt that I was going to fill that condom with so much cum that it would break through condom. After I caught a breath, we decided to fuck some more. This time, I bent him over a chair and hit it from the back. Then the tall Asian returned and got his cock sucked by the European. While I was pounding the Euro-hottie's ass, I got to see if this Asian was really who I thought he was.

And it was him - the guy I lost my virginity to.

The Euro wanted to take a break, so I went back to being voyeur watching some other patrons. Evidently, the Asian had the same idea. He at one point wound up next to me, and started feeling my crotch. I reached out for his smooth skin, and it made me want to take this as far as he wanted to go. Well, I was hoping that he wanted to fuck. And wanting to fuck, he did. He didn't realize who I was yet, but I didn't care. I sat down on the sofa, he got a condom, and took a seat on my cock. He started riding me and it felt so good. He had a nice tight hole, and rubbing his smooth skin while he was riding my dick only made me want more. My cock slipped out of him, and I was glad, because I wasn't ready to shoot my load just yet. He sat next to me on the sofa, and we started talking.

I felt bad about leaving the Euro-hottie behind. Who knows, if I suggested it, the Asian might have thought it would be cool to have a 3-way. But I wanted to settle something with this reunion. So to my surprise, I left the party early.

We got to his place, and immediately went at it. Shirts thrown wherever, pants dropped to the floor and kicked off to the side, and quick massages of the cock and ass through underwear, before it quickly became uncovered cock and ass. We sucked each other's cock like we were babies trying to get the last bit of milk from their mother's tit. And in truth, we did want some kind of milk - Papi's milk. He then took hold of my cock. I love when a guy does that to me. He wet it up with lube, then put on the condom, and what I wanted to settle with this reunion was about to be settled.

For those who remember my tale of that 1st time, you may recall how he wanted me to top him after he topped me, but my nervousness prevented me from doing so. That was not the case tonight. Just like at the NY Jock Party, he squatted down onto my cock and started riding. As much as I loved the sensation of his soft hairless ass bouncing against my groin, I wanted a change. So I got up, and put him on his back. I was trying to stay inside him because I didn't want his inner-warmth wrapped around my cock to go away, but it did at the last second. But I quickly put it back in, and what started as slow strokes in and out, quickly became hard thrusts into him. Thrusts that make that slapping sound of groin to ass that I love, because it means that every last inch of that cock is being thrust inside that bottom with a passion. So much passion that he had pre-cum and fed it to me while I was pounding his ass.

I hadn't come, but I knew if I kept at it I would, so I pulled out. I sat on my knees, and he lunged for my dick, and start sucking it while laying on his stomach. Which led to the beautiful sight of his 2 round ass mounds. I couldn't help but start massaging them while he pleasured my cock, and feeling that ass only made me grow more while in his mouth. But that didn't mean I was going to start fucking him again. I laid down on my back and let him fuck me.

He then pulled out, and we both jerked off until we came. I loved the thought of seeing his cock up-close while he shot his load, so when he asked if I wanted it on my face, I gladly obliged. And he came all over my face. As much as it was, it's surprising that none of it went in my eye. I guess being born with long eyelashes paid off, because the next morning, that's where it was - all dried up. So I didn't wind up screaming the famous line from the movie "Trick" - "It burrrrns!"

He fucked me for a tad 7 years ago, now I've fucked him here, I fucked him there, then it closes full circle by him fucking me for a tad again. So what I wanted to settle had at long last been settled - me finally giving this guy what he wanted, and what I wanted as well - my cock in his ass. You know what they say, "Better late than never". I hope for him 7 years late never felt so good, as it did for me.
Posted by LeNair Xavier at 12:01 AM