We Love The Asian Persuasion 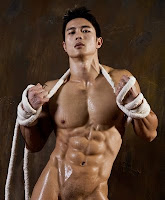 The other day, I went to one of my favorite sites for still pics, WeLoveGuys.net. And what did I see? This fine specimen of manhood.
They said they should be ashamed of themselves that in their 1.5 years online, this hottie Peter Le was the 1st Asian-American they've ever featured. I did give my opinion about that. I said because of his hotness, that they were forgiven. What I left out in complimenting them (because I didn't want to be too political) was how at least their got the clue before so many American porn companies out here of how Asian men are hot as well.
Entranced, I scrolled down the page to see the rest of the pics. When I reached the bottom of the post, and saw that he was also featured on their more explicit brother blog, WeLoveNudes.net. That made me hear angels sing, because that meant I was going to be able to beat my meat to the fantasy of wrapping my hole around that cock, and having a closer-to-true picture of what his cock would look like if he was to ever dip it in me.
If some of you are wondering why I seem to be make such a case for the sexiness of Asian men, I'll explain because some of you might either be new to reading my blog, or forgot the fact altogether that on the night of my sexual awakening I also lost my virginity - in a 5-man orgy. And the guy of that orgy who I had sex with was - you guessed it, Asian. And it was good. Rubbing that naturally smooth skin, and squeezing that hairless butt, was such a turn-on. And every Asian guy, I fooled around with since, while I'll start by rubbing the torso, it's just a starting point to make my way to smooth butt - before, during, and after the sex.
Now don't get me wrong. I for the most part have no real problem with little or alot of body hair, but at least I'm not one of these lame-brains who act like Asian men are lacking in manhood because of them having little to no body hair. And I see no lack of manhood in the sight of Peter Le.
So if you don't have a playmate tonight, take a look at this, and you'll be fine. 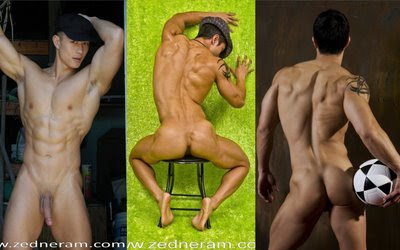