With a background in mainstream entertainment, and a loyalty to it that has yet to die, I do take in a good show from fellow artists that I'm a fan of when I can. 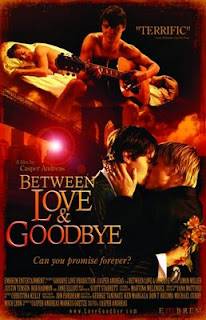 Andreas' new film, "Between Love & Goodbye". I didn't even know the whole storyline before deciding that I was going to go see it. I just found out what it was yesterday when I ventured to the website for the 1st time. It's one of those cases where you hear a certain name connected, and you decide you don't need anymore information. All you know is that that name has you making plans. In music, it could be a singer, producer, and/or composer. And in movies, it can be an actor, writer, and/or director. Hence the reason I've made plans to go see "Between Love & Goodbye". I liked Casper's 1st film, "Slutty Summer", and I also liked, "A Four Letter Word". So there's no reason for me to doubt that I will get the same joy, if not more from watching his latest.

What draws to me to a film even more is when the writer also wears the hat of director, which has been the case of all of Casper Andreas' films so far, except for "A Four Letter Word" where (by it being co-written by Jesse Archer) he wasn't the only writer. But even then, the reason I favor films where the writer/ director are the same still comes into play just as it does this time around.

When a writer writes a movie or play, he/she has a vision of what everything looks like. Once they hand it off to a director, the writer is basically telling that director, "Mr. Director, YOU be the one to give it a vision." Thereby, the writer must have faith in someone else to make his/her vision real. In the case of a writer/director like Casper Andreas, you know that whatever vision he had when writing that script is what you're getting on the screen. There was no need for the writer to entrust someone else, thereby risking a conflict in visions with the director.

That also has me looking forward to the Q & A of director and cast members scheduled after the 7:15 screening on both Friday and Saturday. I haven't decided which show I will attend, but I most definitely plan to attend one of those. I find the mind fascinating, especially a creative one. So it should come as no surprise that I like knowing what goes on in the head of a writer, director, or actor during the movie-making process. I believe that will get my weekend off to a fun start.

So maybe I'll see you there. And if not there, maybe I'll run into you M

My friend, Michael Carmine has revamped his one-man show, SHOWBOY for a new venue. You may recall me doing a review of it before. And as much as I enjoyed it then, I'm sure I'll enjoy it again. In fact, I have convinced 2 friends to come along with me this time. One of whom doesn't even go out during the work week. So if my review peaked your interest before, imagine what the real thing will do now. You can go to his website, make reservations, and find out.

As you can see, I'm looking forward to indulging myself with some great entertainment. I think after my "anti-gay-for-pay"crusades, I deserve the break. And after the tumultuous year 2008 has been for so many of us, I believe we all deserve the break.

So why don't you all come out and join me.

Posted by LeNair Xavier at 8:01 PM