Muscled Cocks and Ass From The Past, Part 1

Last week, I told you guys that I might wind up at a sex party, and I did. And once again, it was a special experience. Partly because of the learning, the other because I ran into a very particular person from my past. I'll tell that story at another time, and I can't give you a clue of when that time will be, because then it will be too obvious of who this person is. But for now, let's stick to the one who was the learning part of the experience.

I went to NY Jock Party and ran into the muscular guy who was pleasingly aggressive with me from my 1st time there. I glanced at him when he was just getting undressed after checking in. I was walking by and saw this tall, muscular, and shirtless figure. By that time, I hadn't chose anyone in particular to be one of my conquests for the night - that is until now. Even with just that quick glance. As it turned out, he felt the same way. And the funny thing is that I didn't realize it was him at first.

There was a bunch of us behind a curtain where alot of action goes on, and I just turned ever so slightly, and grazed someone. This shocked me because to my knowledge, there was no one behind me, and when it turns out there is this big tower of muscle. Just that graze was all he needed and then he started touching me. I didn't really look at his face yet, I just saw it enough to realize that he was the guy I saw when I walked past the clothes-check area. I kept reaching behind me to rub his thighs, which got me hard thinking about how much power must he have in those muscles to thrust into a willing ass - like mine was becoming every second I stood by him.

This was of course just a stop along the way to what I really wanted to feel, which was THAT ASS. I mean this guy is over 6 feet tall, and muscular - that's an ass that an ass-man looks to grab just because it's there. I doesn't require being a nice bump, or well-rounded like someone of a slimmer build or shorter height like myself. And once there, it felt SO FUCKIN' GOOD. After rubbing against his chest and crotch, I turned around, and that's when I realized who he was, even in that darkness. I played with his chest, and my licking his nipples drove him crazy - in a good way. And then came the unveiling from his jockstrap of his cock. It suited his proportions well, because it looked as if his workout routine also provided muscle growth to his cock as well. Now it wasn't too hard to suck, but once he we moved upstairs to get on a bed so he could fuck me, my ass knew the difference.

I needed to brace myself for taking him in. At first, it was not going into my tight hole so easily. Even though I thought in preparing for his thick member that I was already lubed so much that I felt like I my ass was sprayed by an oil truck. I guess to accommodate this monster, I needed 2 oil trucks. Either way, it was worth it. He first did me doggy-style, and I found myself going further and further onto the bed. Once I found myself practically laying on my stomach, I fell away from his cock, and turned over. This only gave way to my favorite position as a bottom - missionary. 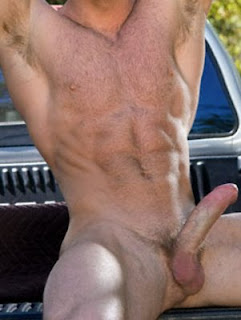 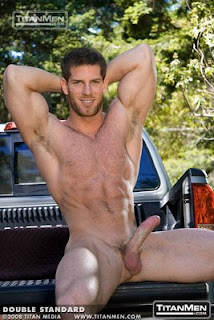 I was stunned by the sight I saw. I never saw a muscular torso like that fucking me before. And with his physique being identical to that of Titan Exclusive, Dean Flynn (even down to the amount of chest hair), it was like seeing Dean's torso up-close. I just realized that I occasionally fantasized about it, but never actually had a muscular guy before until I was actually in the midst of having one. And he fucked my ass with the intense pounding I figured those muscular legs would help him to achieve.

Well they say be careful of what you wish for, because when I last wrote about this guy, I said that I wouldn't mind getting with him again. As you can tell, my wish was granted. Granted so that my hole was almost in no shape to take on the other person I'll be writing about soon, because that muscular guy fucked the shit out of me. He fucked me so good that he inspired this slideshow featuring the Michael Jackson-penned Diana Ross song, "Muscles".


Now after inspiring such a thing, somehow I did accommodate this other guy. And yes, I'm teasing you about who this other guy is. And the only clue I could give you is that he's important enough that I left the party with him. Now of all the sex parties I've written about here, I've never left a party with a guy.
So that should tell you - this guy was something worth revisiting. Enjoy all the post until Part 2 ---- whenever that is.
Posted by LeNair Xavier at 12:01 AM