This past Saturday, I went to the Skin Tight party at Stonewall. Skin Tight, for those who don

't know is a party where most of the guest dress up in skin tight outfits like superheroes. Some guys did wear superhero costumes, some wore biker tights, while others wore singlets. I myself wore the top and bottom you see in the pics with the underwear that I wore at the Black Party over the tights.

I've always been curious about these Skin Tight events, so I just thought I'd give it a go. What heightens the curiosity is the fact that there are some people who have a bit of a fetish towards superheros, spandex, lycra, and what have you. In fact, I must admit that I've seen some bikers who inspire fantasies in me because they're wearing those tights. And I guess it all comes down to those tights being a thin layer between 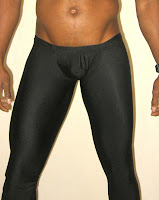 you and the part of that guy that you really want to get to.

With that in mind, you know my wandering eye was checking out everyone in the room. And there were some eyes checking me out as well. The problem is that the initial eyes checking me out were invading my personal space. For instance, after I got dressed, I went over to the bar, and as soon as I got there, this older guy came over putting less than 18inches between us (if that) staring at me the whole time. This was annoying me because before going to Skin Tight, I was at Dance 208 at the LGBT Center, where this guy insisted on dancing right in my line of view facing me. So winding up in situations twice in one night where I'm feeling boxed in made me find neither one of these guys cute or endearing. Instead, I found them to be obsessive. Now, I don't for one second take for granted my being considered handsome by many. In fact, I'm quite thankful for it. BUT that doesn't mean that my right to place myself in a room without being cornered like any other human being vanishes.

There is a way to do these things, and a few of the other guys there got it right. One guy who wasn't dressed up at all looked at me from across the room, we made eye contact, and he came over. We had a great conversation. We later went to sit down where I met his boyfriend, who kept playing with my nipples since they peaked out from under the cut-off top I was wearing. They later had to leave, so after that I went over to a friend of mine who was there.

As the night went on some of us took off more and more of our costumes. I for one, got rid of my tights, while this cute guy I was talking to changed from the singlet he was wearing into a short version of the tights I had on. Although, not too long after, thanks to this cutey, I got stripped of my cut-off top, so I was looking pretty much the same way I did at the Black Party.

What made all of the observations something to take note of is what we were wearing at the time. We were all standing there almost naked. Now if you can have a conversation of any depth in that state of dress with a straight face, maybe I'm wrong, but unless you're an actor, whatever you say has to be of complete unabashed honesty.
Posted by LeNair Xavier at 5:55 PM