I have said here before that I don't get the idea of bottoms using poppers to relax them where they can take in a big dick. Therefore, why at sex parties do I see tops taking poppers as well, I have no idea except to assume that they're some kind of addict, and they're so used to taking something, that for that moment, a popper will do. 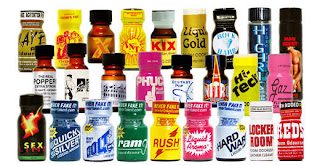 I've always just lubed myself up until a guy's cock was able to go inside with no pain. And if there was any pain, it would soon go away as my body quickly adapted to his dick, because of my longing for him. Not a popper in sight. I'm not going to deny that I have tried poppers, but just to find out why so many guys seem to use them. I tried them, hated the headache, and being the self-control freak I am, didn't like the uneasiness. Besides, I never experienced becoming more lose by using poppers anyway, so I stick to my original routine as a bottom.

And what has it profited me? A reputation for having a tight hole.

What made this come about was my going to a sex party this past Sunday. I topped on 2 guys there. Both of them tall. Both of them with nice asses. One of them, who I'll refer to as Guy #1, had a nicer more round ass than the other (Guy #2), and I wanted to so badly come while fucking him. But there was a problem with Guy #1. I would start, then I would lose my hard-on because he wasn't tight enough to hold my dick's interest, and he kept sniffing poppers. He sniffed them so much that while thrusting into him so vigorously that guys were loving the loud slapping sound of my groin meeting his ass, I would have to stop so he could take a sniff.

After my 1st attempt at fucking Guy #1, Guy #2 came along. Guy #2 actually gave me a blowjob that got me incredibly hard for fucking Guy #1. Therefore Guy #2 earned a piece of my dick, so when Guy #2 came for his turn, he pulled down his briefs, I got another condom, and fucked him. It felt SOOOOOO GOOD! His ass was so tight, that I stopped fucking him because I know if I kept going, I was going to shoot a load, but I wanted to build up a big wad for the end of the night. And get this about Guy #2 - NOT A POPPER IN SIGHT. Which only adds to the shame Guy #1 should be feeling because Guy #2 appeared to be older.

So I eventually gave up, and had a hot Latino fuck my ass while groping his plump ass, and I did what I don't usually do - I came while being fucked. And I came alot.

Something in my mind told me that there was a reason those 2 guys were so different feeling to me. Could it have been that Guy #1 bottomed for guys quite a bit thicker than myself, so now his ass is stretched out? I myself have been fucked by incredibly thick cocks while maintaining a rep for a tight hole, so that theory was questionable. OR for this guy, did poppers actually work, and that's why he was so lose?

I'm being to think the latter, because looking back, this isn't the 1st time I've experience losing a hard-on while fucking someone. Every guy I've lost my hard-on with while fucking them used poppers. The few that didn't, brought me to or near an orgasm.

Due to this realization, I am going to make it official here today, and I'm sure many of you are not going to like it. But here goes my bottom line on this:

If you can't take a cock in your ass without sniffing some poppers, then you are not a man at all, and will not be topped by me. Nor will you top me.

I might tolerate you at a sex party, but never again in private. I'm sure many of you have your thoughts on this, so feel free to comment. But do take note that this is MY RULE FOR ME. One that is backed by logic, so if you disagree, it's highly unlikely for me to consider what you say having any validity.

Now, I may be lessening my number of partners for tricks or long-term by a great degree. If that's the case, then so be it, because I know there are some people out there man enough to let only the sex be their high, therefore go at it popper-free.
Posted by LeNair Xavier at 12:01 AM