Last Friday night after a long time since my last trip I wrote blogged about, I went to Baña. I knew I was going to get into some mischief, and my lusting eye found a target to imagine myself with as soon as I walked downstairs and saw the attendant to check me in.

He was tall, nice-built. And as I checked him out from top to bottom, I notice he had a fuckin' hot ass. He looked awfully familiar to me,and just recently I realized why. He was a spitting image of Playgirl model Jeff Defrances, right down to the long hair.

And it's not that far a stretch to think something could actually happen. Remember last time I went to Baña, one of the attendants went above and beyond the call of duty and tended to me by giving my ass a pounding I was more than pleased with. In fact, I ran into him while I was there. He was in one area, while I was walking up the stairs to the pool and jacuzzi area. We said our "hello's", and while I wanted to stop and talk, I kept it moving because I know myself. Remembering that body and that dick was going to make me want a confirmation fuck. You know - just to make sure he was as good a fucker as I remember.

This time, I finally got to wear the swim trunks I was hoping to wear when I last tried going to Baña, but it got cancelled.

So how do you think I looked wearing this number? I love N2N Bodywear. Their designs leave so much, yet so little to the imagination at the same time.
I went and sat in the jacuzzi, and realized that this cute comedian I once saw at an event was there as well. Not only was he there, but he was checking me out. I gave him a few glances that I progressed to accompanying with a smile. I thought we were going to interact right there, but he later got out, and to my surprise, it turned out he was totally naked. Damn, I wish I knew how to swim, so I could have tried sucking him off underwater. I've seen it done in porn movies. Most recently in the appropriately named, "Underwater". 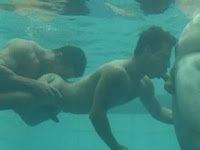 That night, I was wishing I could do it myself.

Well, I did eventually get to fool around with him. I got pretty bold, guys. I walked pass him, looked at him, stopped, and just reached out for him to feel on his hairy chest. We just stood there making out for a bit. And I did mention that he was a comedian, I have to say that when I reached down to feel his cock and massage his balls and ass - I discovered that they all would bring a smile to your face, but not out of laughter. You'd smile because you had the chance to grab hold of them.

After that makeout session, I was left to have fun with some other hotties. One of these hotties, made his hotness short-lived by his lack of tact in makeout skills. Such as the fact that he called himself biting my lip when he kissed me. Problem is he really did bite my lips. Any skilled makeout artist knows that you don't actually bite the lips, but let your teeth graze the lip with just enough force that you can pull it. And he lacked the same tact with my ear. And I was thinking, "Wait, a fuckin' minute! When in the hell did you become Mike Tyson, and I became Evander Hollyfield!"

Maybe he should try that makeout style at a party held by an S & M enthusiast, because I like making out not having to wonder whether or not blood was drawn from my body. Unless I was making out with the sexiness of Vampire Lestat. And this dude was not it. But I soon had something to take my mind off that makeout woe.

Now, to be honest, I'm not normally into older guys, but I started drooling when I saw Colton Ford. His body is soooo fuckin' amazing. Why wasn't I doing porn when he was doing it? Although with my luck, I probably wouldn't have had the fortune of him as a scene partner. Well, along with his body being amazing, so was his voice, and his dancing with the sexy guys and gals of The Daisy Spurs. They put on a rousing show that I never expected to see at Bana. And just about everyone at the party came in to see the show.

It was a fun night. I did miss the fact that I didn't see my fellow cast member from "All Out Assault", Mike Dreyden, who was working the clothes-check area for those who didn't purchase the ticket that gets you a locker. Since I had paid for use of a locker, I really had no reason to run into him, but it was would have been cool to run into him by chance and say "Hi". Especially since he it was announced that he would be working the clothes-check in his birthday suit.

Well, you have to admit, even though I missed that, I made out pretty well, because Baña was hotties galore. I was tended to by hotties, made out with some hotties, and watched some hotties (both male and female) perform. So Baña boys - when's the next one?
;-)
Posted by LeNair Xavier at 11:31 AM