I was glad to see some hotties in the crowd including go-go stud Freddy Wolfe, and another pornstar, Lars Svenson.
Speaking of Lars, while I love a good hard primal fuck, I'm not as much of a fan of Lars, as I would like to be, because he usually comes off in scenes where you can foresee his roughness as soon as he steps into a frame. But when he walked in on Wednesday night, I wasn't even sure it was him. Because he looked like this tall, slim, blond-haired mild-mannered hottie, who therefore would surprise you if he had an edge on him. And that possibility (instead of obviousness like you see on screen) made me ready to drool over the sight of him that night. So much so that I flirted with him while I was onstage guest calling a round, and we were wagging our tongues at each other. Yes, the energy flowed just right for me that I loosened up more that night than at previous Porno Bingo appearances, as I predicted. And this was without even 1 drop of alcohol in my system. Alcohol however will play a part in part 2 of this story later.
After seeing a couple of performances at BAAD! when asked what night I wanted to appear, I was more than willing to volunteer my time on BAAD!'s behalf. With the comic relief from drag king Macha and drag queen Appolonia Cruz, the neo-soul musical stylings of Nohjj, PLUS being reunited with former castmate, Johnathan Cedano, from the independent film I did in my mainstream entertainment days called "Jaded", it was an extremely fun night. I even wound up signing just above a woman's breast. To all you hetero-phobes out there who are irked by that bit of news. Tough TITTY! Bi-guys like myself revel in moments like that. 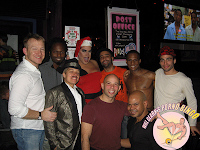 And I held true to my usual way of wearing unusual underwear, while I was wearing this in Black:

Now, see what you missed.

You missed out on the chance to take me out of this jockstrap that just like it looks in the picture, snaps off from the sides and front, with the front if unsnapped would have revealed to you my dick in a built-in cockring. Which would have meant more time to savor taking it off of me. 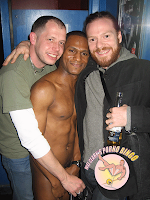 be a dancer - and you know how I feel about dancers. YUMMY! Participating to help out the charity, a friend of mine who was visiting from out of town won. While I greatly applaud and appreciate my friend's participation, you know I was lusting for the redhead to win, so an exciting evening could begin. Well, at least he got to watch my friend take the jockstrap off of me, so he got to see some parts of me I wanted to show him. He just didn't get a chance to get up close and personal with them. But at what seems to be becoming a new tradition with me appearances at Porno Bingo, someone did get up close and personal with those parts later on. But I'll save both that tale, and about the alcohol for tomorrow.
Consider this post, to be just like me -----a tease ;-)
Posted by LeNair Xavier at 10:44 AM