At practically every one of Daniel Nardicio's parties I've been to in the past, I noticed that the Blacks and Latinos never get completely naked. Maybe shirtless, maybe in their underwear, but never totally bare-assed like some of the White guys there. So being both the pioneering Aries and the mutt that partly includes African and Latin blood, I decided to represent and go the full monty at his last party. I did the same thing at Daniel's party this Labor Day Weekend, and I may have motivated another Black guy to follow suit and do the same this time. Am I starting a revolution to start motivating Black and Latino exhibitionism at these parties? If so, it's about damn time, because while it's a dirty job, someone had to do it.

While I had fun a helluva lot of fun as usual at Daniel's parties, there was a moment where my space was very much intruded upon.

I got on the line for the bathroom. There was this guy there in his underwear, with a bit of a beer gut who I knew was drunk off his ass, standing behind me in the line. He was acting like he couldn't keep still, and he would constantly bump into me. And it wasn't a bump like an accidental one. You knew these bumps were for the purpose of making his presences known to me, and hoping I would reciprocate. First of all, there is nothing sexy about bumping into me like we're inside a pinball machine with you as the pinball and me as a bumper. But I cut him some slack because I knew he was drunk as a skunk. The problem came in because he did it so much, that I started to make a face when he did it. He apologized, and I was hoping he got the hint.

I stood there with my bare-ass, arms folded with my raised eyebrow to symbolize the darkest of my dark side was nearing the edge of arising and replied, "NO, it's not alright."

His return to me was, "You're not that cute."

The whole time this is happening I'm getting closer and closer to getting in the bathroom. So by this point I was next to go in. With that in mind, I stood there and didn't say a word in return, because a plan of retaliation was forming. Plus I am fully aware that since beauty is in the eye of the beholder, according to his beholding, I must have been that cute.

My plan of retaliation was simple, and it's one I'm famous for, even to my own mother. I waited until that bathroom door opened and responded, "It's not that I'm that cute. The problem is you're invading my space," then I closed the door behind me.

Once the door closed I could hear someone howling laughing. I don't know was it a coincidence and the person was laughing at someone else, or was it maybe the eyewitness to the incident, like maybe the guy behind my space invader. Well, if the latter was the case, I was justified, so I could less about how humiliated he might have been.

As I was thinking about this story, I remembered that the first "Space Invaders" took place at Splash Bar in NYC. And I'll be there doing some runway modeling in a fashion show for SUPERSTEIN on Friday. So I hope I don't see any of you invading someone's space or see someone invading yours. 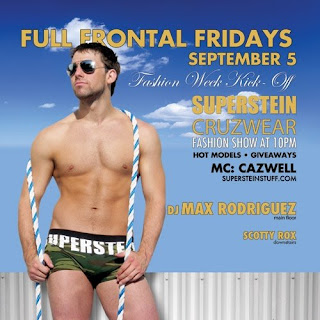 With that in mind, I hope you'll come cheer me on for my runway modeling debut, while I cheer you on for not invading someone's space, therefore giving them the right to retaliate in the fashion I did with that drunken fool, OR WORSE.

I want you all to have fun, and be safe, therefore be courteous. Have a good one.

Posted by LeNair Xavier at 9:45 AM