The Runway Scene by Le SUPERSTEIN

Last Friday, I had my runway modeling debut in the SUPERSTEIN Fashion Show at Splash Bar. I was honored to be one of those chosen to be a part of it. I have been passed over for various appearance opportunities by people based here in New York, so this made me more grateful than most who so easily get to make these kind of appearances.

The chance for me came about was by way of a bulletin posted by SUPERSTEIN wanting models for their debut runway fashion show in NYC. I sent them an email, and I was shocked to get a thumbs up. Every step of the process - from getting the OK in the email, to the phone conversation to confirm, to the follow-up emails to learn my size, and then to keep me updated on the schedule, made it more and more real to me that this was actually going to happen. I told all of my friends and co-workers, many of whom I knew would not be there, but just knowing I had their support in what I was doing was enough for me.

Always being the observer, I looked at the various email addresses to find o 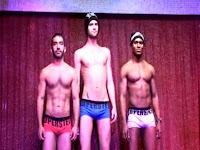 ut who else going to be there. By that observation, 2 people I figured were going to be there was go-go boy Pony and my "ALL OUT ASSAULT" co-star, Mike Dreyden. And wouldn't you know it was those 2 that I was partnered with to walk out on to the stage with showing the most skin. So I'm sure those of you New Yorkers who missed it are now wishing you were there. All so you could see this live. Click this pic to see this in action. 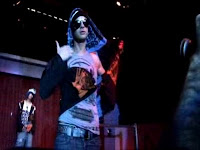 All the adult entertainers modeling did not show so much skin. Lucas Entertainment's Ben Andrews was also modeling in full gear.

I met some new cool guys as well. I didn't know too many of their real names, or their screennames if they 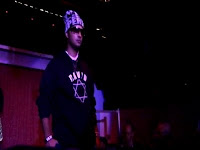 were from DList.com like myself. That is except for a cutie who turned out to be Adam a.k.a. TheDreamer from my friends list. We even shared a good laugh over the fact that we both had the same fear - that we would go do our walk on the runway and bust our asses for all in Splash to see. Luckily for both of us, no such embarrassment befell (pun intended) either one of us.

The always hilarious Mike Diamond was also on hand with his special brand of reporting for Edge New York. You can check out his report here.

Heather Leigh West closed out the show as all of the models were on the runway with me and /Mike Dreyden up in front, Mike came up with the idea for us to start dancing, and it got the crowd even more riled up then they already were. Smart move, Mike. 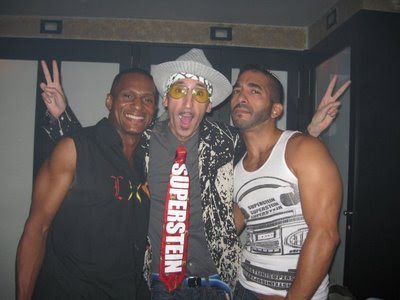 This was an experience that I won't soon forget. Thanks to John Walke, SUPERSTEIN and Splashbar staff and my fellow models for making it a great night.

You can get some of this great gear yourself at http://www.supersteinstuff.com/.

Posted by LeNair Xavier at 7:10 AM