I was recently told that I seemed angry lately. Well, in response to that, if forums like blogs existed before I came into this industry, and/or enough people showed a backbone and took a stand instead of complying with the matters I address (like too many more powerful peeople are still doing today), then I might not seem to have so much to be angry about.

But this is Friday, and my plan always for Friday is to lighten things up. With that being said....

For once, this past Sunday I was able to go onboard the Queen Of Hearts for a Sea Tea without having to work the event. That gave me the perfect opportunity to record some video of the scenery of NYC along the Hudson River.

One thing I was anxious to get was footage of the man-made waterfalls. That's why I made it a priority to put the year in the title, since this is the 1st summer for those waterfalls. I was talking to a friend of mine from my day job, and we were talking about those waterfalls. Mainly how the ones that are under the bridges seem to have the most appeal. The others simply look like just what they are - water running over scaffolding. That's why I highlighted the waterfalls under the Brooklyn Bridge in my video.

Of course, it wouldn't be a Sea Tea without some cute guys running around. One cutey in particular caught me by surprise. While I was recording, I heard a voice saying, "That's beautiful."

At first, I was felt a bit annoyed that someone was looking over my shoulder 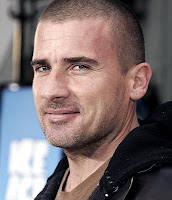 so intensely. Remember, I'm quite territorial over anything that is mine, such as my personal space. But I calmed down when I realized 2 things - actually in this order: 1)the fact he was complimenting me on what I deemed beautiful enough to record, and 2)when I turned around to see who I had to say "Thank you" to, the guy turned out resembling Dominic Purcell from the show "Prison Break".

(Speaking of "Prison Break", a little side fact: Wentworth Miller and I went to the same high school. He graduated a year after me.)

Back to the cutey on the Queen Of Hearts.

I always have trouble starting up conversations, but we did talk enough for me to find out he does live here in NY, and he's originally from Spain. No wonder he's so damn gorgeous.

So without further delay, check out my video. If you haven't been on a Sea Tea yet, maybe it will motivate you to experience one before the last voyage of the season so you won't miss out on seeing this scenery with your very own eyes. Enjoy.