Is the gay community still living in a way with ageism, racism, and sexism that makes me feel the need to post my poetry series "CHALLENGER" TWO YEARS LATER?! 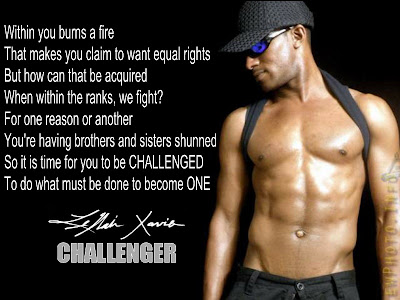 Unfortunately, the answer is YES.

At gay parties, from the bartenders, to the go-go boys, to the advertising, White or maybe light-complexion is the theory of what sells. Meanwhile promoters will claim to be all-inclusive. Really?! And while I can easily name names here, I don't want to diminish how this post can relate to where you live across the globe. So I'll let you fill in the blanks with the names of guilty parties since this blog is read all over the world. Plus, the guilty parties already know who they are where I live. And that guilt riding on them like Atlas holding 2 worlds on this shoulders instead of one is why those promoters that are my age have not aged as well as me, and those that are a good deal younger than me won't age as well. For God (or whatever your belief system calls a higher power) rids the physical and/or mental scars of guilt to those who have enough humanity to not cater to such mean-spirited & overcompensating ostracizing.

While my poem "Elders' Beauty ...From Elders' Strength" addresses the ageism where mainly gay media and advertisers undermine the contributions of our gay forefathers to where were are today, the ageism I'm taking note of now is that of ad campaigns, calendars, and posters, calling for 20-somethings, yet their main audience wherever they're selling to is age 30+. This does not inspire our older gay males to maintain themselves. Instead, it tells our older gay males who happen to be financially well off, "Don't worry about staying fit. For these young, dumb and full of cum teens and 20-somethings, your money and position for them to ride the coattails of will look fit for you." And those who are not financially well-off that their existence is hopeless. So with tactics like this, are we really supposed to be calling ourselves "proud"?!

Unfortunately, my respect for gay media is still for the most part in the toilet. For it's too White-dominated, and the only non-Whites that they allow in are the ones who make little to no noise about the racism present. And if they do ever address the issue, it's never said with enough passion to truly express people's annoyance with the situation. We instead have to settle. Well, I don't take well to having to settle. For my adulthood and intellect deserves the cold, hard truth. But gay media can't give the cold, hard truth, because the most popular gay "news" sites are all owned by the same avoiding, robotic people. So no new and individual ideas surface. Nor can most of these authors on these sites and blogs really be called "writers". For how many times have you gone to a website and all they did is take one story from one website, write a one or two paragraph intro, and post it on their site? All too often. And that author is not a writer. Hell, he/she is not even a blogger. For a blog is an online journal, and an online journal consists of individual ideas. So with this being the case, my respect for gay media will not happen until the media consolidation STOPS. Therefore letting issues like racism, ageism, and sexism be dealt with integrity. Instead of the kid gloves their lapdog so-called "writers" and "bloggers" are addressing it with.

Based on all I have said here, is there anything to have gay pride about? In myself, for the individual I have made myself into, a loud, echoing, glass-shattering HELL YESSSSSSS!!!! However, for our community as a whole, sadly (but honestly) I must say, an equally loud, echoing, glass-shattering NOOOOOO! For I am still witness to too much of the self-destructiveness, pretentiousness, overcompensating, and ostracizing that made made write CHALLENGER in the first place.

And if you are all honest with yourself, you will admit to it as well.
Posted by LeNair Xavier at 11:44 AM