At Titillating Tongues last Friday night, while I titillated the crowd with the sexy lyrics of "Be My Pillow", I led in with the preceding more serious poem. For I felt someone needed to address how the gift of sex should be treated, but by too many actions and so-called occupations (some based on communities & cultures), the gift of sex is actually mistreated. This in turn leads to unhealthy expectations in our sexual relationships, regardless of whether or not those sexual relationships are casual or long-term.

With that said, it should be no surprise based on my recent events and writings that I consider gay media's green-lighting of male prostitution and the low self-esteem shown in porn scenes as major influences as to why this issue needed to be addressed. And as you can see, I even point to the excessive domination and submission in the leather scene (shown by my participation in the movie, "B.L.A.K. (Bruthas Live And Kinky)") and being flogged (which I was at last year's Folsom Street East) to be examples of this problem. Showing myself participating in these things makes it clear that I have not been a saint in contributing to this problem. Even though I had misgivings about such sexual behaviors before those experiments. So I am hoping that this poem brings me a step closer to redemption in this matter. 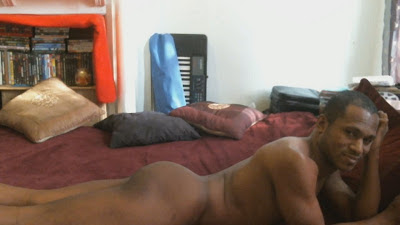 Posted by LeNair Xavier at 1:23 PM