How many of us know someone who seems to be unable to be alone?
Their bedroom is a revolving doors of tricks. Or they get a new "significant other" almost immediately after taking a breath from getting rid of the last. Or when they should be spending some time alone contemplating how they got to that bad place (and how not to repeat it), they're instead always out partying, drinking, and/or drugging to make themselves blind to the world around them.

All of these things are ways for them to avoid the silence they need for soul searching. The problem is...they refuse the silence. For in that silence, we are forced to admit to our flaws, as well as their sometimes disastrous consequences to ourselves and to others.

Probably because the sentiments are so deep within me, as they've been expressed before in some way in the posts "You Think I Should Envy You?" and "Hook-up Sex Equations", this following poem became so easy to write. So much so that it came to me in the middle of the night, and was completed in less than 24 hours. 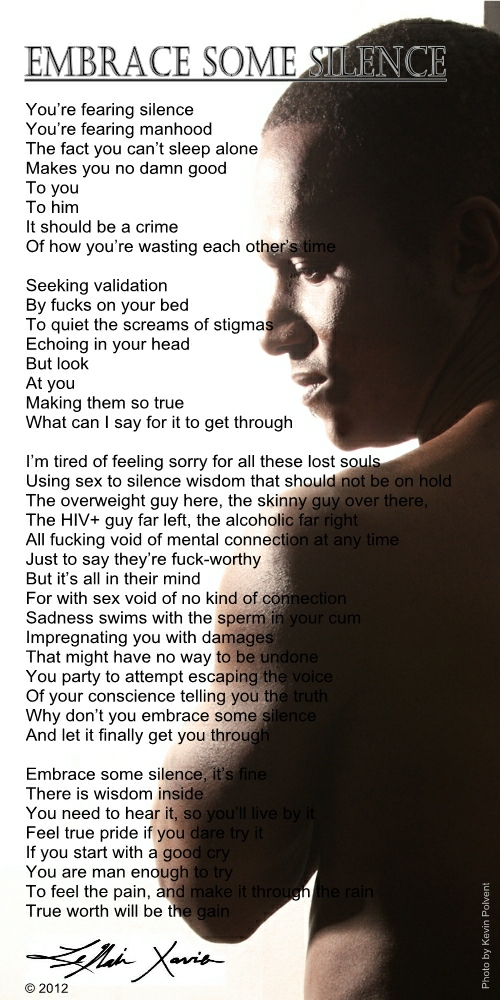 Posted by LeNair Xavier at 7:00 PM

Email ThisBlogThis!Share to TwitterShare to FacebookShare to Pinterest
Labels: Poetry, Word Of Advice