You might recall this paragraph from "Post-Poetry Salon, Then Getting Naked":

....my shy self actually got up the nerve to make some new contacts on my own with a couple of LGBT publishing companies and magazines at the Rainbow Book Fair....I don't want to give away any names here as to who I spoke to, so I don't jinx my chances of something coming to fruition. 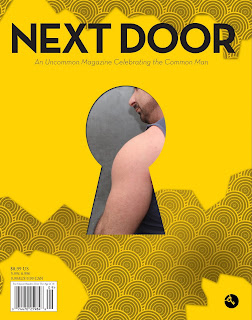 One of those magazines that my shy self made contact with was Next Door Magazine.

I was walking around the Rainbow Book Fair as I waited for my turn to present my poem in the Poetry Salon. I've seen Next Door Magazine before and always thought about modeling for it. When I first went to their table, I looked, but didn't say a word. I honestly don't know how many times I came to the table, but I'm sure the guy who was manning the table probably thought I was a stalker after seeing me so many times. But then I told myself, "If you don't speak up, nothing will happen."

So after all this, it shouldn't be a surprise that it was with a raised inner-eyebrow that I made my move.

I went up to their table, and asked the guy manning the table how they got their models. He told me that they sometimes put out casting calls, and then he asked me if I was interested. With the door now open, I told him, "Yes".

And time did tell the tale. In a good way. I got emails from Next Door Magazine keeping me posted on the planned issue, planned time for a shoot, and then a date for me to confirm. With me responding to each one promptly.

One thing I was told for the shoot was to not do too much man-scaping. Because even though some porn stars have appeared in the magazine, with the magazine's slogan being "An Uncommon Magazine Celebrating The Common Man", Next Door Magazine isn't looking for their models to be pretty by unnatural means like shaving or photoshop. I got the email a bit late because I did already trim my pubic hair, because the Sunday before the shoot was Will Clark's Bad Boys On The Hudson Sea Tea, and I couldn't have my pubes peeking out from underneath my underwear. Yes, my pubic hair is that long if it's not trimmed, and it hides about an inch of my erect cock. I will admit that since the shoot, I've become less inclined to shave my chest hair.

Next Door Magazine also puts no pressure on their models to have an erection. Evidently, they go by the logic that I presented in a line from my presentation for "Sex Worker Literati" in December 2009 entitled "Size Queen: The On/Off Switch". The line reads:
"...my only question about a guy I consider HOT...is plain and simple…..GOT DICK? ..." 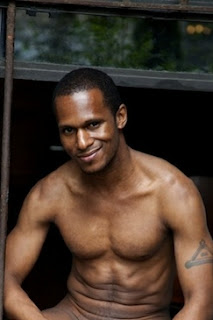 
So here we are with the end result being you as my Peeping Tom. And it being my pleasure to be peeped by you. So make sure you get a copy of the September issue of Next Door Magazine, because from what I've seen, there's a little something for everyone in this issue. Enjoy.
Posted by LeNair Xavier at 8:55 AM

Email ThisBlogThis!Share to TwitterShare to FacebookShare to Pinterest
Labels: Promotion