Recently, I gave another guy a chance to become involved with me. Well, he got past a month. A week past to be exact. But there were too many issues that my perceptive eye knew would be a problem, yet not only did I gave it a go anyway. I also tried to deny the existence of these issues.
Such as his being so unable to let go of his long gone ex that even after taking me for a picnic in Central Park, he would not consider us dating. Now, while I'm 15 years older than him, his ex is 20 years older. I was well aware that our age difference was pushing it in me being a daddy-figure, but an ex 20 years older is a definite. This became more evident when you take into account that we met as volunteers at a sex party where he would initiate conversations with MOSTLY the older patrons. This plus him not having the best relationship with his father will show any mental health professional worthy of their degree exactly what it showed me...He has sexualized the love he felt void of from his father.
This is just one of the flaws I tried overlooking, and I felt early on that it along with the others that I saw early on would come back to haunt me. And so they have. In fact, my recent blog posts "Socializers & Escape...Um, Artists", "Write That Down #37", and "Blog Rep For Truth...TESTED" are all based on his insensitivity and shenanigans. And please don't try giving him the excuse saying "Well, he's young." Because getting by on that excuse is why so many young Americans grow up to be old Americans not worth a damn.
Now, you are probably asking yourself, if I saw this early on, why would I bother with him for even that long? It's because I see the potential in these people, and how they're so weak in one way or another that they've allowed life to beat them down. In short, they are my former self before my coming to terms with my orientation. Actually, they're even more beat down than I was. So since opposites attract, I guess I'm drawn to filling the void that I know of to some degree all too well.
So to be honest, all signs were there that it was going to fail early on, but I gave it a go anyway. Why would I do this? It's because I was testing myself to see if guys not getting beyond a month with me was really their fault, or was it me being too quick to judgement therefore not accepting their flaws - flaws being a trait that we all have as humans. Now, since I put myself in the line of fire, you may be wondering what right do I have to be angry? I am angry because I'm so often right in my initial assessment in thinking the worst of people (hence why my circle of friends is so small), that I on occasion put myself in the line of fire hoping that for once - FOR ONCE...someone would prove me wrong. Because when it comes to perceiving negativity, I am sick and tired of always being right. Sadly, this was another such case. I just took a little longer than usual to admit it.
Now, some of you may feel that it's cruel of me to post his picture. Well, first of all, his acts of insensitivity were cruel, uncalled for, and I by no means deserved them. And if I ever exhibited the same bad traits to someone, I want someone to put me on blast as a wake-up call for me to get my shit together. But while I know I'm not perfect, the truth is no one has because no one can. Why? It's because just as in my collage "Evil LeNair, Good LeNair", I gave the good. I gave of myself to where they experienced kindness that was the closet thing to heaven on Earth for them. 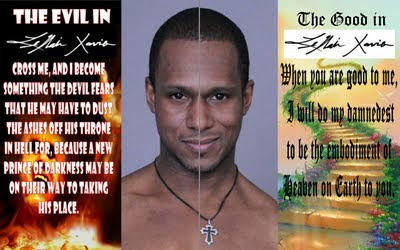 But now,...the fact that it was never grasped onto for dear life, unappreciated, therefore returned unlike I deserved it to be is why now, they get "the Evil in LeNair". So my dark side just makes me use my artistic talents to vent saying cruel but honest things where I don't care if  he laughs or cries, lives or dies in response to them. My normal human compassion...for him, is now dead.
At this point, there are some desperadoes (more old than young) who I'm sure are near to the point of drowning in their own saliva looking to save this "poor" soul. My advice to you is...Go ahead. Show your desperation after all that you've been told, and all that will be confirmed.
With all that said, the poem that came out of this is one I'm sure many of you could relate to on some level. For it tells how you get involved with someone hoping for the best, but as time goes on, you feel like you're paying for the crimes of the person's ex, and how a point comes where your self-respect makes it a must to say, "ENOUGH!!!!"

Of my many artistic talents, I like to draw, but I haven't done it for quite awhile. My time modeling for Leslie/Lohman has resurrected my desire to draw, and I decided to make this the project where I put my new work on display. So along with the poetry, all of the drawings in the video were mine. It's not my best talent, but if you're going to critique it, do take note that you should base critiquing of my drawing prowess on whether or not these drawings helped to tell the poem's story. Please do not base your critique on 1 particular drawing style. For it will lessen the validity of your critique. Thank you.

Email ThisBlogThis!Share to TwitterShare to FacebookShare to Pinterest
Labels: Poetry, Posts of Intervention, Why You're Single, Word Of Advice