@PINK 2.0 - The Silence That Spoke Volumes

Last Tuesday, I attended PINK 2.0 LGBT Media and Marketing - Past, Present & Future at the LGBT Center in NYC. Considering how I've mention the lack of diversity in LGBT media in past blog posts, I felt this event was the perfect opportunity for me to try and get some answers.

I came to find out that this discussion was being held in Room 310. That made for a table-turning moment, because on this night I was walking into the room as an audience member. However, just 11 days prior, ---- I was walking into Room 310 as the speaker on the stage, for that's the same room I did my poetry reading of "The Industry".

I knew my question, but I wasn't sure of how to word it. I finally figured out how on the subway train ride over. And even by the time the train got to my stop, I still wasn't finished writing it down. Therefore, it wasn't truly memorized. Once inside, I finished writing my question down. When the discussion became open for questions, I didn't want to be reading from a paper. But something told me that once I opened my mouth, the words would just flow. It turns out that I was right.


My question was:
With the demand for equality from the straight mainstream being infused into the many forms of LGBT media and marketing, do you find it to be false advertising considering how LGBT media and marketing doesn't practice equality itself by portraying beauty and intellect to come from only Whites and light-complexions within the community?

Since the question made a lightbulb go off for the moderator, NBC New York's weekend meteorologist, Raphael Miranda, I'm sure it went off for others in the room as well. And it is probably going off for some of you as you read this blog post. So considering the way-too-long neglected dissension within the LGBT community, I'm glad to have brought forth a long overdue question.

Now, as far as who answered it, There were FIVE (5) panelists.


DAVID BLOCH - Focus Features, SVP Marketing
MICHELLE KRISTEL - Executive Director of In The Life Media, Producer of "In The Life"
AMY LESSER - Editor of Go Magazine: The Premiere Lesbian Magazine
QUINCY MORRIS - Creator of the new web series, "In Between Men"
JOSH ROSENZWEIG - Here Media, SVP Integrated Marketing
I must say that I was quite disappointed to see that of those 5 panelists...ONLY 1 answered.

That one was Quincy Morris, creator and executive producer of "In Between Men".

This did not sit well with me, and I will get back to explain why in a moment. But first, I will give you the short version of Qunicy's answer.

Quincy said that since the lead character was based on himself  that he was originally looking to cast a Black male as the lead character of "In Between Men". (Had I known about this role, I might have auditioned) Anyway, he either wasn't able to find many Black males who were comfortable with playing the intimacy involved for the role and/or those auditioned were missing something needed for the role. However, the actor who was reading with those who auditioned, Nick Matthews, did have what the role required. So it was a Catch 22 - casting someone totally based on race, even when the part is not necessarily race specific, OR cast someone who brings what is needed to the role. And understandably so, Quincy chose the latter.

Quincy and myself talked for a bit after the discussion, and while I thanked him for being the only one who answered my question, he in return commended me on asking a good question. During our conversation, we realized that we shared a lot of the same annoyances with portrayals of men of color (or lack thereof) in gay media.

This conversation led to me taking Quincy up on his invitation to go to the website, and email him there if I saw fit. Once there, I did send in a couple of follow-up questions. Which were:
How well-received has "In Between Men" been thus far? And if it has been well-received, do you think it would still be as well-received if your original stated intent to cast a Black male as your lead would have come to fruition?

In Between Men (IBM) has been received extremely well. I initially just wanted to diversify the landscape by offering a true representation of many gay men that be found very easily in the media.  The show has resonated with many men who feel the same way I do.  People are grateful and excited that this show has reached consciousness, gay and straight alike.  The show is being watched in over 100 countries around the world, and I get emails on a daily basis from places like Iran, Serbia, Africa, and obviously the US thanking us for the show and how excited they are about it and how much they love it.  The audience continues to grow. 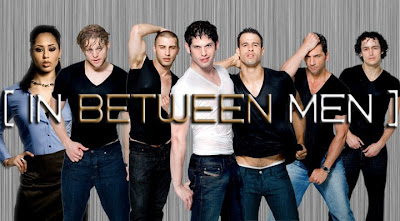 I am completely confident that the show would have been successful with a black male lead.  One of the things that people love about the show and what makes it different than any other show with a gay theme, is that it is so accessible and relatable.  I can only imagine that greater diversity would only allow it to be even more accessible and relatable. And ultimately the stories being told are ones that we all can relate to as gay men.  They are stories that in one way shape or form represent things that affect all of us and that the daily life these men live are not exclusive to African American men alone. I live by the philosophy that we have way more in common than differences in this world, no matter what our background.

Like Quincy, I do believe that we have more in common than we do have differences. It is the reason that during my time in studio-based porn that I've always challenged companies and websites to stop acting as if scenarios were race-specific. And with that, I also believe that Quincy is right about people accepting it regardless of the ethnicity of the lead character. I hope we are not wrong on either belief. However, if we are wrong on the latter, then that means that the American LGBT community has more growing up to do than any of us imagined.

This leads to my getting back to why Quincy being the only one to answer my question did not sit well with me.


It is because the panel was comprised of people from different forms of LGBT media and marketing. David Bloch works in film, Michelle Kristel works in public television and online media, Amy Lesser works in print, and Josh Rosenzweig works in cable television. Therefore, ALL OF THEM should have had something to add. Part of me feels that it was my mistake as an interviewer when I ended my question by saying how either one OR all of them could answer. Because it in some way gave them that chance to duck the question. However, anyone who was in attendance can tell you how they were quick to show off their egos over expertise in their individual mediums on other questions. So the fact that they were so quick to display the "Oh, it's a race question - let the Black guy handle it" mentality by allowing Quincy Morris to be the only one to respond to my question tells all of us about how many members of that panel live with an unevolved naiveté.

Well, they need to be informed of reality. For the reality is that...


....Segregation and racism are not "minority" issues. They are HUMAN issues.

If you ever wonder why there is such separatism within the LGBT community, and why the refusal to take part in gay rights functions is so prevalent amongst gays who are Black, Latino, Middle Eastern and Asians ----the answers lied in the silence of the other panelists. For that silence spoke volumes as to how we do not feel represented because WE ARE NOT REPRESENTED.

And if we are represented, it is marginally so.

Proof of this is just as simple as a stroll out into the hallway of the LGBT Center, and picking up most of the magazines out there, or going to a newsstand and picking up a gay news magazine. Or by turning on your television and watching the gay cable channel, Logo. Or going to a gay news website. Or seeing which gay films get most often described as "beautiful" and/or "smart". Each of these forms of gay media and marketing display the LGBT community as a community living in a mindset prior the Civil Rights Movement thinking that beauty and intellect come primarily from Whites and people of light-complexions.

Well, if that was really the case, then I wouldn't be able to be so eloquent in either case of asking my questions at PINK 2.0, or making this overall observation in this report. Now would I?

I have repeatedly said on this and other blogs, if we are to make demands from our oppressors, then we must be better than our oppressors.

Many minorities have all too often seen a White or light-complexioned gay activist or performer praised for something said to a media outlet or post on their blog, when the person of a darker complexion already addressed the same subject matter AND made those media outlets aware of it anywhere from a few months to more than a year prior to them praising that person who is White or light-complexioned. With behavior like that, how is LGBT media showing itself to be better than the oppressors in mainstream media? IT IS NOT.

At the close of the discussion, a hostess advised us to show our support for LGBT media by donating to, buying, and not bootlegging LGBT media. Really?! Why should I donate to television stations that televise shows like "In The Life"? Why should I not bootleg a movie by Focus Features or something on Here! network? Why should a lesbian not photocopy a friend's copy of GO Magazine? Why should I not when I feel that because of their color and/or ethnic background, some forms of LGBT media are giving my fellow members of the LGBT community such limited representation, if any at all?

I hope those panelists, and other members of LGBT media and entertainment get wind of this report, and give some real heavy thought of how they handle their affairs. And really consider what it means for the voice of the LGBT community if some substantial changes aren't made SOON...