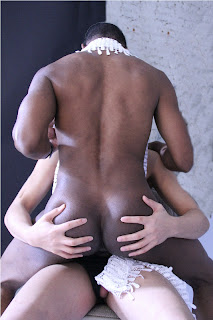 When I uploaded the picture on your right to Twitpic, the caption I made for it said:

Maybe not this position, but a lot of my sex starts like this....light-complexioned hands on my ass. ;-)


Well last weekend at the Milk Chocolate NYC party, this was one night where a variety of colored hands were on my ass starting off the sex. I've written about some trysts there before, but this one being on the heels of my poetry reading, reminded me of one particular poem from that poetry reading. So much so that this was a story I had to tell.

Once there, I went to the upstairs party area. I saw this tall, slim, and young White guy bent over getting fucked by more built White guy of average height. I didn't know who I wanted to be more, the top or the bottom. The top didn't seem interested in me. He wasn't rude by doing something like throwing my hand off the very second I touch him like the most racist in faggotry do. Instead, he just didn't react, so I took the hint. The tall and slim bottom however, reached for my now hard cock, and after the other White guy fucked him, he went down on me. And he was good. In fact, I seem to have found a good number of guys who can give good head lately.

It turns out he was there with an older guy. The older guy knew I wanted to fuck his young friend, and he let me. I suited up, and pounded his ass. The more I felt his smooth soft cheeks, and looked down to see them bounce from my thrusts, the more I couldn't decide if I should fuck him to the point of cumming, regardless of the fact that I hadn't been at the party for even 30 minutes yet. I did know that if I did shoot a load this fuck-a-round, that my stamina was good enough to easily go for Round 2 as a bottom, or a top. But while I decided not to fuck to the point of shooting a load, the sight and feel of that beautiful ass and his moans did make me fuck him harder before calling it quits on him.

While I was fucking the young White guy, a dark-skinned Black guy about my height and build who was getting sucked off reached over and started rubbing on my chest. In that dim light, he obviously had a vibe that made an impression on me. Because after fucking the White guy, I washed myself off a bit. I then went back into the room, and the Black guy was standing against the wall while a group of guys were gathered on and around the bed. I saw the Black guy, considered him, but in my being draw to group sex, I went over to the bed instead. But even then, the Black guy was on my mind the entire time.

I saw the group around the bed, and for once found myself not wanting to be in the midst of the sexual clutter. So I went back to the Black guy, but by this time a White guy was fooling around with him. So I leaned up against the wall and watch. Obviously the Black guy still wanted me, because he brought me into the mix to where he was now sandwich between me and the White guy, with the White guy against the wall, and him facing me. While the White guys was touching us both and I was enjoying it, this time, again for once, I was getting the feeling that 3 hot guys together (even though into each other) was a crowd. I guess the White guy felt the same, because he slipped out from against the wall, and left us to ourselves. And I think we must have both wanted that, because that's when we really went at each other.

What was odd about this intense attraction for me was that fact that he was dark-skinned. It's not that I don't find dark-skinned guys attractive. But as I've said before, my artistic eye is drawn to the color contrast, so I usually go for guys lighter than myself. But I have repeatedly said that I would never rule out the possibility of being with a guy my complexion or darker. Well, this night put me to a test that I never saw coming.

He rubbed my chest, and I rubbed his. I worked my way down to his ass, and OH MY GOD!!!! It was so nice and juicy. Then he started to feel my ass in return. Usually in a make-out session, my ass gets grabbed first. So he turned the tables, and I was loving it. His dick was rock-hard, and I kept making out with him. But in all honesty, I wanted to fuck. My making out was really 2 things: (1)getting up the nerve to say that I wanted to fuck NOW, and (2)buying time to decide that once given the green-light, which position do I offer to be for him first, top or bottom.

I took a risk, and offered to be his bottom. This is a risk, because usually after being a bottom with a versatile guy who wants a flip-fuck, my knack for picking good tops makes me get fucked so good and hard that I'm in no mood (or sometimes no condition) to top afterwards. So for me to bottom then top, like I did in my video "Tre Xavier with Lucky Irish" is a rarity.

He asked if I had a condom, and I reached into my sock and got one, as well as my Wet lube - all of which I brought from home, because I don't care much for the Lifestyle lube that they have there. I lubed up his cock a bit bare, then again with the condom on. Then I put lube on my ass and prepare my mind for his nice-sized cock. I laid on my back to be fucked missionary so I could grab that ass while getting fucked. Because of my tight hole, it took him awhile to get in because he wasn't 100% hard. Once in, for whatever reason, he couldn't stay hard. I thought maybe being in missionary wasn't working for him, so I opted for doggy-style. He got hard, but still couldn't stay hard. But I still wanted in that ass, so I prepped my cock the same way I prepped his.

My dick was like a heat-seeking missile that night. Because like the White guy, he also had a nice tight hole that was followed by a tunnel warm to my cock. Between that warmth and the sight of his 2 dark chocolate-covered pear-shaped ass cheeks surrounding my dick, I couldn't help but bang the fuck out of him. This was another sweet hole that I had to pace myself with or else I was going to bust a but soon after entry. So I did him the same way I did the tall, slim White guy earlier - gave him some even harder bangs, then called it quits. He apologized for his hard-to-maintain hard-on, and I told him it wasn't a problem. Because there have been days when it has happened to me as well.

Next was a Latino, who was also close to my size and build. We first came in contact while I was making out with someone else who I can't recall because all we did was make out. When me and my make-out partner parted ways, I returned the favor from the Latino and started to suck on him. My mouth was quite shocked to have to open up so wide for this thick dick on this simply toned  and shorter frame. After showing how good my hole above the waist can be to his dick, he decided he wanted his cock to now fill my hole below my waist. So from my sock, another condom and more lube gone, he dressed up his dick, and let me have it. Missionary, doggy-style, and on my stomach - not once, but twice. Even as a versatile guy, who when I bottom is a self-proclaimed power-bottom, I have no idea how I took those 2 passionate poundings from him. And was considering taking more pounding from his big-cocked Latino friend.

Things with his friend didn't work out. After I wash off a bit, I came back to find another guy was sucking him off. He made eye contact with me to show that his plan was to fuck me after. However, after the guy stopped sucking on him, he went to the restroom. While he was in the restroom, after thinking he would be a no-show, a fuck-buddy that I had invited to the party finally showed up. My fuck-buddy started sucking me off. Then the other Latino came back and wound up occupied elsewhere. My fuck-buddy was making me hornier by the second. Especially after seeing an Asian guy come up behind him, and start fucking him while he was sucking me off. So after that, I wanted my turn at his hole.

My fuck-buddy is about a year older than me, and has an amazing body, which includes a hot dancer's butt. I fucked him doggy-style while he sucked off another guy on the bed. Neither of us came. The party was winding down, so we decided to leave. Once outside, my fuck-buddy invited me over to his place, and I accepted.

The next morning, as with most guys I've slept with (be they a trick or a guy I'm dating), I was the first to wake up. Once he made a turn and saw me awake, he started playing with my cock. He made me get rock-hard, then straddled me as I laid on my back, and put my cock in his ass. We took turns between me thrusting hard into his hole, and him riding my cock. He was jerking off the entire time, and when he shot his load, he leaned back to let it shoot on his stomach. Afterwards, he got up to clean off, but not before I took some of his cum to use it as lube to jerk off.

While feeling his hot body, it didn't take long for me to shoot. And I shot my load all the way up to my chest. It had to be the tension I had built up from me having a night of living the dream sex I talk about in my poem "Sex In Rainbows". Because I walked into the sex party and right away I dipped my chocolate into the vanilla of a White guy, then went to the sweetest dark chocolate brown in a Black guy, then went to a boost from tasting the mocha brown coffee of a Latino. So this was a night where I lived the motto of a Skittles commercial and "tasted the rainbow". Although this rainbow was more like one you would find at Starbucks, it still had some sweet flavors that we all should not deny ourselves of feasting on.


Maybe then we'll be deserving of the equality so many of us keep demanding. For then, we'll be practicing what we preach.
Posted by LeNair Xavier at 1:51 PM