Chancing Sex Beyond The Preference

If you open your mouth or exercise actions to show that you feel a certain color or ethnicity could not possibly have someone you find sexually attractive, then you are practicing sexual racism.

Now, if you open your mouth or exercise actions to show that you find all colors and ethnicities beautiful, but maybe drawn to one more than the others, then that is sexual preference.

However, while the latter of those 2 shows better character, there maybe a degree of racism fueling one's preference. Hence why this argument of the difference between "racism" and "preference" keeps waging on. I will be the first to admit that based on the racism I have felt towards Black males because of so many bad instances done by them since my birth, I ask myself every time I turn down a Black guy's advances if it's from that racism. Or is my preference for guys my color and lighter from an honest place. Well, I must honestly say that some of the past advances in person and online that I turned down from Black guys were done with that prejudice in my heart.

So what gives me the right to point a "Shame On You" finger at some of you readers?...The fact that I'm admitting my mistake, and took enough of a look at myself to correct it, and fight it when circumstances put it on the verge of resurfacing. That's why now, my turning down the advances of Blacks come more from an honest place. Now, the same ineptitude in social skills that has caused my turning down of Whites causes me to turn down Blacks, instead of that plus color. Hence how the following story came about....

At this sex party, every Black guy so far had done the same thing that has prevented me from finding a sexy Black male to play with for so long. Breaking a rule I have repeatedly said in posts about sex party etiquette---Sure he would look at me, but instead of waiting for me to return a glance, he would grab either my arm, but usually my ass. Either way, it was bad form. And had happened so often that I thought I was near crossing Black guys off as possible prospects for playmates, therefore never as boyfriends, and therefore never as a husband. Mind you, I was never specifically looking for a Black male, or any male of any specific color. When I go to a sex party, I always look for a connection, not about horniness, but a mutual lust for each other. This observation of color/ethnicity is an after thought that comes when I tally up the various colors and ethnicities I have spent my time with, and why such is the case.

I had some fun during the night. Then later during the last couple of hours of the party, just as I was on the verge of calling it a night, this Black guy walked pass me and stopped. Because of his dark skin, and the extremely dim light, I could hardly see him, which frustrated me. Because the vibe I felt was that he was not like every Black guy before him. He was someone I would enjoy. For starters, he followed my rule of sex party etiquette by waiting for my return glance before making a physical move.

For after he stopped, I looked back at him, and in spite of my apprehension about trusting that vibe, I did what I hadn't done to any other Black guy during the course of the night. I let him get closer, and reciprocated his advances. He touched on my chest. I touched on his. He had a nice chiseled chest, then my hands went down his torso to feel his six-pack abs. By this time, his hands had already went down my torso, did a fondle of my dick and balls, and finally stationed on massaging my ass.

We then started kissing. Each second got more passionate. To the point that he lifted my right leg to his side, then I wrapped it around his muscular left thigh. He took that as an opportunity to take my left leg so I would wrap it around his right thigh. So I was now wrapped around him, and we continued kissing. We were almost near the walkway of the area, so he picked me up and put my back up against the wall as we continued making out. We then knew that this much making out at a sex party made us having sex becoming a must. He wanted my ass, and I badly wanted his cock. And whatever position we fucked in, I needed to be able to feel that body. So if he didn't make it that way, I was determined to maneuver the situation that we did not end up doing doggy style.

He carried me to this weird apparatus in the club. It slanted downward. He put me down on my back with my head directed towards the floor. There was a little step on it that he got on, and as his silhouette hovered over me, I prepped my ass for his entry, because his cock couldn't get in me fast enough. Although because of my earlier encounters with Black guys that night, in parties past, and online, who imitated the most known Blacks in gay porn, who are the worst representation of us, I wondered if I was jumping the gun in wanting him inside me so bad. But I trusted my instinct about the initial vibe, relaxed my tight hole, and let him in.

He slowly put his cock inside me, and the further inside he went, the more my nerves tingled with pleasure. And once he was all the way in and started thrusting, I started touching his body. Feeling the build up of sweat on his chest, abs, and flexing-from-thrusting round ass made my nerves tingle more than I thought possible. So I didn't feel like I was the White boy in every porn scene I've ever come across with Bobby Blake, Diesel Washington, Cutler X, and the like - with a Black male's dick as the fist, and my body as the punching bag using sex to take out some historical rage towards slavery times. This made every thrust of his cock into my ass lessen my fear that my vibe about him was wrong. In fact, because of being rid of that fear, I don't know how many times I yelled "Holy fuck!!!!" as he pounded away at me. But the other patrons sure knew. For I noticed that with each of my yells of "Holy fuck!!!!", more guys came over. Making me see more and more silhouettes over my playmate's shoulder, instead of the part of the club I saw when I was first put on that apparatus.

By the time he orgasmed in my ass, all of his actions made sex with him not be about finally having sex with a Black male. It was about having great sex with a well-mannered, civilized man. It ended up being the best sex I had all night. To which I basked in it for a bit, then got my clothes and went home. 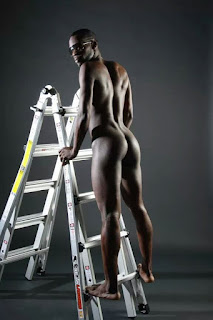 I don't know where my head was as to why I didn't get his number. Because he definitely has a dick I should call upon when I want to be a hungry power bottom. After all, he liked taking my ass, but what makes me want replays is because my vibe was right. Even though his look and body fit the gay media-induced mold of what constitutes as a "beautiful Black man", his actions didn't play the porn-induced concept of an overly aggressive Black male. For he wasn't about holding me down and making me a total submissive, and forbidding me to touch his ass. He also had no problem with letting me show my hunger by me using my ass to grind on and squeeze his cock.