I wrote the above post on Facebook on August 31, 2015. It was after numerous instances over the years of seeing the behavior mentioned in that post perpetrated by White guys. Behavior that is so out of hand that during a trip to the backroom of a bar that very night, I saw 3 instances of sexual White entitlement. With me as the target of 2 of those instances...2 PITIFUL instances. And here they are:

Pity #1
I was at an underwear party observing some backroom action. The guys in the action were hot, and they both seemed to like the buffet of men. For while their main focus was each other, they each allowed others in. One of them however allowed more guys in than the other, and I became one of those "more guys". With that being the case, I stuck around. Actually, I kind of had no choice because part of how I became that "more" was by the more inclusive hottie grabbing hold of my hard dick every now and then.

Suddenly, this White guy comes over from my left, and tries to literally repeatedly bump me out of the way. In response, I solidified my weight. The fact that I weigh only 145 lbs, and he outweighed me by at least 30 lbs., and still wasn't able to move me shows just how strong I am. Since I wasn't so desperate, I could have easily let him please his social ineptitude and desperation, but since I'm all about studying people, I wanted to see how far he would go. He would not let up. I, one of the only 2 Black guys there (and smaller of the 2) possessed the spot he was willing to challenge someone for, while more convenient ones were possessed by other Whites. Never mind the fact that if he got pass me, the guy he was gunning to suck on had his back to him. So once I finally got tired of making him a test dummy for my observations, I let him through. Now, you didn't think this violation of my personal space and prize that is my body would go unpunished, did you? Hence why as soon as he dropped to the floor to suck like a savage on the guy who was occasionally fondling me, I made everyone laugh at him when I said for all to hear while shaking my head, "Desperation ain't cute."

A bit later, I could feel some eyes on me. It turned out being Mr. Desperation. Taking so long to get his thoughts together that I forgot all about him. I didn't even notice when he got up off the floor until he awakened me to his presence saying, "You said desperation ain't cute. Well, neither is cockblocking."

This proves his delusional sense of entitlement. For when is it "cockblocking" when someone stands their ground against you because you're not your target's boyfriend, and you're pushing that someone to get to that target? So I replied, "Me, cockblocking?! Bitch, your socially inept, desperate ass shoved me!"

So to that, his childish retort was, "You know what? Your ass stinks."

Like I said, childish. And not only childish, but also dishonest. For if my ass did stink. How would he know. He was nowhere near it. As I said before, he busted into the area totally from my left. When I responded out loud with this recall of his desperate entry, he shut up. However, from that point on, if looks could kill, someone would have died, but it wouldn't have been me. Because I could care less of his attempt at intimidation, which with his sense of sexual White entitlement only angered him more.

In addition to that, my calling him out in front of all the guys there made it so that even if he wasn't consciously aware, the only ones who would play with him after that were those just as desperate as him, if not more so. The problem is while misery usually loves company, desperate people don't want another desperate person as their 1st choice. They initially want someone unlike themselves - someone confident enough in what they have to offer to show freedom of choice. But my exchange with him snatched that phony mask of self-confidence off his face, then crushed it. And the sadist I become when you overstep your bounds enjoyed every second of the hell my honest words put him in.

Pity #2
Later on in the night, a White couple I saw walk in earlier came to that backroom area. I wasn't sure, but I thought when they walked into the bar that they were checking me out. When they came to the backroom, it was confirmed. For while one was sucking off another guy, the other was sucking on a brown-haired White guy and after seeing me from his side-eye, simultaneously reached into my jockstrap to start sucking on my dick. So he was sucking on me and the White guy. I touched on the other cocksuckee, and he was non-responsive. So I left him alone. Since he obviously didn't want to share (especially with me), he left in a huff. With him gone, once my cocksucker's partner saw he had me, that partner took a break from the cock he was sucking to give my cock a double-teamed suck.

Then the brown-haired White guy came back interrupting us. He was trying to get my playmate to come with him. This is when  the racism driving attitudes of sexual White entitlement make the guilty step on the toes of another White guy. For when dealing with a couple, you have to first acknowledge their dynamic and play rules. I could obviously see that this couple had the rules of being able to play separately, but stay in the same area. So while his partner was playing a few feet away, I knew my playmate wasn't going anywhere. And I'm not such a narcissistic bastard that I felt it was out of obligation to me. I was well aware that it was out of obligation to his partner. His obligation to his partner just happened to work to my advantage...and that White guy's bruised ego.

Too bad that White guy (who came back a number of times) was so self-involved, and full of such a false sense of sexual entitlement that he never realized he was overstepping. Overstepping that even though he did not succeed, Karma will bite him hard in the ass (and maybe his dick) for trying so many times out of sheer undeserving arrogance.


The cause of these instances lie in the pages of gay media rags, gay porn, gay nightlife and the magazines and websites promoting all of them. And it's not just Whites who can be found with such a false sense of their sex appeal and their worth to the ccommunity. Some ligh-complexioned Latinos and tall, dark-skinned, gym-bodied Black males - in short, those epitomized in gay media as the best of each ethnicity, tend to also exhibit these traits. But it's more seen in Whites. Proof of this is seen by how many of the complaints we have about our community can be seen in those sources parading the aforementioned as the best there is. But who runs those sources? Mainly racist White males, who if they claim to like people of color at all are more quick to fetishize them. And who are the other people of color who should be speaking on this issue staying quiet to appease? Their fellow sellout people of color, and...racist White males. 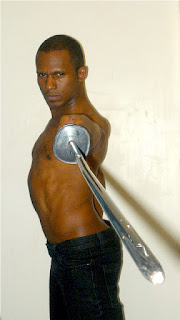 That's why people like me are their worst nightmare. For my responses (in words and actions) like in the aforementioned incidents bring them back to the reality that they know, but don't want to face about themselves...In sex appeal, or wisdom, they are NOT the best there is.

Well, you're welcome racist White bitches. Now, keep your hands off my conquests! Because trying to steal mine only shows that contrary to the racist White gay media hype, you're actually not good enough, therefore not man enough to get your own.
Posted by LeNair Xavier at 10:40 PM