To explain the above video, 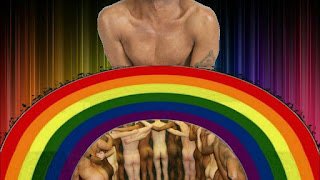 SEXUAL RACISM is a big problem in the gay community. It is the reason why the most known parties in gay nightlife here and other major cities across the country are staffed with White or light-complexioned Latinos. It's why Blacks are exiled to create their own parties in these multi-ethnic and multi-cultural meccas.  It's why gay media,be they porn, magazines, or websites like Out, Instinct, and now The Underwear Expert put Whites and light-complexioned Latinos front and center so much that that is all we've come to know as a sign of sex and beauty. In fact, Out Magazine just had a list of Top 10 Eligible Bachelors, and the supposed votes led to there not being a single medium to dark-complexion in the bunch. It is because these media sources have ordained that these shades, colors, and ethnicities is what we are supposed to look for in our search for beauty and sex appeal. And this in turns causes those shades, colors, and ethnic groups ostracized to practice the same foolishness in retaliation.

We all may have a preference, but sadly the many naive amongst us are led to override our natural openness because of a culturally-ordained belief force-fed to us that certain looks, colors, etc. are "The Rule" of what type of mate you are to seek, for a night or for life. And seeking any other type is a sign of self-destructive behavior, or societal suicide, if you will. That's why we see so many online profiles saying "

Now, what does that dismissal profit you? For now, a revolving bedroom door of the same color scheme coming in and out as long as your youthful looks remain intact. Followed by after losing those looks, if you can afford one, a prostitute from your local bar or Rentboy.com-like website. Oh sure, that's a sign of a happy life....And it's Karma giving your racist ass exactly what you deserve - phony companion for the phony love you decided to embrace.

This is a topic I have addressed numerous times before, but what inspired me to write this poem is the fact that in my entire 7 years of blogging, I've seen myself and other Blacks addressing this issue as being unjustly labeled by White-dominated gay media as suffering from ABMS (Angry Black Man Syndrome). Yet, Whites have been allowed to write about racism on website like the Huffington Post. However, when a Black writes about racism, it's delegated to their "Black Voices" section. Quite unfair when 1) these Whites writing such posts are seeing the racism they're speaking of from the outside looking in, and 2) such separatism in reporting makes the reality of racism reported from those living it like us Blacks get ignored by the White or light-complexioned person whose racial insensitivity needs to be undone by learning that lesson.

So as I got back on the horse of writing poetry, I decided to live by what I said in a recent Facebook update when re-posting my poem, "Run From The Fun":

And it is my pride that guided me to writing this poem. For the same way that status update told how a lack of self-pride leads to drug and alcohol abuse, the same lack of pride is why non-Whites (mainly Blacks) have allowed themselves to fear being labeled as "angry" in addressing racism. So they refrain from publicly addressing the racism (sexual or otherwise) in not just the gay community, but American society overall.

Well, "Kiss....The Rainbow" is me saying, "Fuck those bitches!", and pushing forward.

For the truth needs to be told. And when my youthful looks fade, I have no intention of being that lonely old man sitting in the corner of a bar trying to buy some young & cute companion. So this poem I'll be debuting at The Rainbow Book Fair's poetry salon, Come Hear! is my declaration that I'm not letting some media or so-called "friends" limit what color or nationality my significant other should be. This poem is my declaration that I am making myself available to kiss the entire skin rainbow from light to dark, and everything in between as long as they mentally stimulate me enough to give my mind and body for a night, and adding my heart and soul with the one with whom it becomes for life.

If you are in New York City come April 13th, I hope you'll be there to support me, and show your openness in feeling the same.

When I know within the exact hour of the fair I'll be presenting, I will let you know. Thank you.
Posted by LeNair Xavier at 11:40 AM