Be the man single, partnered, married, young, old, straight, gay, or bisexual, I don't know a sexually active man alive that when his birthday comes around, who doesn't have at least a little hope for some birthday sex. I must say that in many ways, I don't consider myself to be the typical male. Well, in my hopes for birthday sex,....I AM. Where I continue to not be typical is exactly what type of sex is on my wishlist.
With that in mind, here are a few possibilities of what kinds of birthday sex I wouldn't mind having:
1) When I started writing this list, the thought of me finally getting that double-penetration I've been asking for a few years now was #1. Now, although that has since happened, as the details will be told live on stage at Spill! on March 26th, I still wouldn't mind doing it again.
2) International gangbang. For the list of guys I've bottomed for can make up a Gay U.N. But I would love to make taking that many nationalities all in one session be my gangbang bottoming debut.
3) Maybe I'll get one hot guy that I've been lusting after for the longest to say, "Surprise! When the clock strikes 2:57 AM (the time I was born), I'm going to be banging your ass so hard you'll hear bells."

If you're wondering why all of my birthday sex wishlist requests have me as a bottom, when I clearly have video proof of me being versatile, the answer is quite simple.

While being a bottom is more physical preparation, being a top is more physical work. And it's my birthday damnit! So my plan is that whatever fucking I do, I just want to take that ass-pounding like a man in whatever position I wind up in, with my only physical labor being taking a deep breath to take in that dick(s), and using the muscles of my ass tunnel to squeeze out the man-milk. With all other physical labor involved in sex, the top will be servicing me, the birthday boy.

Now, I don't really expect you to provide anything on my birthday sex wishlist. However, you can still make me happy by donating to my participation in this year's AIDS Walk New York. THAT would be a birthday present helping many. 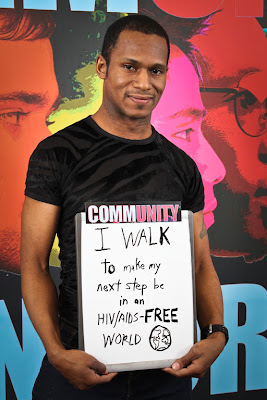 And that item on my overall birthday wishlist will continue to stand until the big day, May 19th.
Posted by LeNair Xavier at 5:24 PM