Review of S.O.S.: Save Our Sex

Tuesday night, I attended the discussion "S.O.S.: Save Our Sex" held at the new xl Nightclub. I very much support the idea for this discussion, because a discussion such as this needs to be had. And NOT for one night only.

The topics to be discussed were:
-anonymous sex
-barebacking
-money, sex, and drugs
-labels, gender, and race
-marriage and open relationships

The issue of barebacking  and porn's role in influencing it seemed to dominate the night. To the point that practically all the other topics slated to be discussed never got addressed, and those topics of which the names were said were said because of their connection to barebacking. For this reason, the question I tweeted to @SaveOurSexNY never got asked. I admit that I did however chime in at one point for all to hear.

Unfortunately, what I left out of my comment due to time constraints was how I come from a very religious background, and I didn't have sex ever until that coming out.


FYI - this year, I celebrate 10 years since my coming out to myself (February 9th) and losing my virginity (February 10th).
Some may feel that the safer sex message targeting the gay community is no longer out there with as much force in mainstream media. That's actually true. However, the message is still being put out there. It hasn't gone anywhere. It is mentioned often enough in mainstream media, and should be taught in homes anyway by responsible parents. So if anyone in the gay community believes that the message is gone, then they need to realize that before people come out to themselves as gay, they often lived as I did - lying to themselves that they are the straight majority, with parents treating them as such. And some of the things taught to them while in the straight community can actually be called "knowledge". And condom use is one of those bits of knowledge. Therefore, those newly out gays need to bring that knowledge with them when they start their lives as gay adults.

One problem I saw with this event is that because of the importance of the issues that the press release listed, an event such as this MUST START ON TIME.

Furthermore, they could have saved a good deal of time getting right to business, instead of trying to get off. They could have done this by doing away with the "networking' part of the event where they give you name tags color-coded based on your relationship status. This may sound strange coming from a sexually liberated person such as myself, but the fact is that while I am so "sexually liberated", "sex positive", or whatever term you want to call me, I am still very much capable of prioritizing when and where sex is needed to be a selling point. And the fact that we were discussing it, should have been enough. Anything else should be done on your own time.

Now, I can't totally fault them for not realizing that these hot button topics needed an individual night for each. Because it brings to mind my poetry reading last year of "The Industry" how the each of the 5 poems of that poetry series could have been a basis for a discussion topic all their own. Leading to 5 different discussion nights. Yet we tried our best to squeeze it all into one night.

At one point of the night, the issue briefly changed to labels. But NOT the labels that we need to address like through the racism that makes the gay community their own worst enemy. Instead, they addressed the simple labels of "top", bottom", and "versatile".

Someone commented on those labels, and too many in the audience cheered as far as I'm concerned.

For that reason, I said to myself of the crowd, "How ignorant!"

I say "How ignorant", because it's another case of how gays are so hung up on the slang labels used to slander us that they blind themselves to the labels that we actually need to define ourselves in some capacity. For the labels of "top", "bottom", or "versatile" are much needed labels. How else are we to define the type of sex partner that we need? Since with gay males, 2 tops can't fuck each other, nor can 2 bottoms. Now, while as a predominately gay bisexual male, I don't understand the logic behind being a total top or total bottom since nature blessed you with both parts to be such. However, it is the individual's call of whether they want to use one or both parts as a tool for the emotional and/or physical attraction expressed through sex.

Furthermore, the problem is not having the labels of "top", "bottom", or "versatile". The problem is the fact that some gay males are faggots and not men by trying to use terms like "bottom" in a derogatory fashion towards their fellow gay male, and the term of "top" to overcompensate for own self-loathing.

Now, if we were going to have a needed talk about sexual labels like the question I tweeted to @SaveOurSexNY, I wonder how could this panel even try to answer it properly. For to actually address the issue of sexual labels based on race, it in no way can be properly addressed with a predominately White panel when Whites in media and entertainment are the ones who started most of these negative labels. 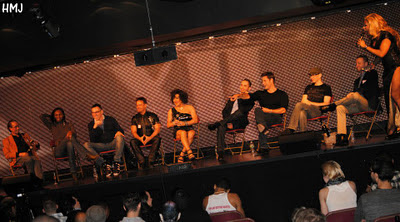 Such as how muscled-up gymrat Black males are on the arms of Whites for the sake of using sex as a way Whites punish themselves for their White guilt. Or Asians being taken on the arms of too many Whites to be treated as sexualized peons. This topic would be GREATLY mishandled by this panel. Especially when in so many previous blog posts, I have mentioned some of the names and/or positions of some panelists for perpetuating such imagery.

Also, is Tyra Allure, the lone far-from-white panel member supposed to speak for every non-White? It's not fair to put that weight on her shoulders. Just as I have put it on mine in addressing racism in blog posts, because practically all non-White bloggers I've come across cater to only their own ethnicity, which keeps the separatism within the gay community initiated by White-owned gay media very much alive.

Some may try to say that this review is just me being upset because the questions that I sent via Twitter never got asked. That would be those trying to avoid the truth. For while I have my infantile moments like everybody else, I can assure that this is not one of them. Because 1)I already admitted to how an important issue was discussed, and; 2)I even put aside my long documented disdain for Michael Lucas aside to show myself as living proof of a point that he made.

So you can count this review to be totally based on truth.


Truth that can help the organizers to:
1)make these discussions continue;
2)grow in attendance to the point of needing a much larger venue, and;
3)being more inclusive of ALL members of the gay community with their marketing tactics. Because with the panel line-up, had it not been for a direct invite from Pepper Mint, I for one would not have attended. Due to my feeling many of my brothers of different ethnic and social circles in the gay community were not represented.

With that in mind, imagine how many other people who feel left out in some kind of way did not attend, but should have that night. Or should in the future.

Something to think about...
Posted by LeNair Xavier at 3:20 AM