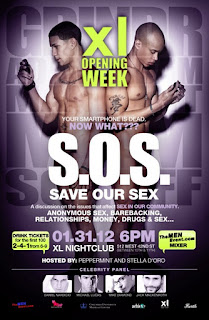 Yesterday, I got an email via Facebook from Pepper Mint. I was being asked to be one of the VIP celebs for the event "S.O.S.: Save Our Sex" to take part in its discussion about as the email says, "EVERYTHING that affects gay sex and the LGBT community."


I had a prior engagement that I was going to attend that was also of a very important topic, coming out stories. But being after taking note of the line-up, I felt I had to do my extremely rare action of reneging on my plans to attend the other engagement where I was to be just a guest in the crowd, and instead take part in this event where I could be an actual voice for all attending to hear.

For sadly, the fact is that for a NYC event, "S.O.S: Save Our Sex" seems to have a severe lack of color in its line-up. And with that absence of color in the line-up before my signing on, I'm sure that some topics were waaaay more than bound to be overlooked, or if thought about at all, easily swept under the rug. Hence why I took it upon myself to take advantage of the Facebook ad mentioning of submitting questions via Twitter to ask this question:

In response to my tweet, I got this reply from @SaveOurSexNY:

With that reply, I am looking forward to being a part of this event even more so than when I originally signed on. If you are in NYC, I hope to see you there as well.
Posted by LeNair Xavier at 1:10 PM