No Valentine, And I'm Fine

This is how I see myself in love. 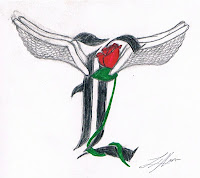 Forever in flight. Intertwined with my significant other.

Contrary to what you may think by my sexual escapades that I write about, as this drawing of mine from before my coming out shows, I was actually very much a romantic. And I still am.

However, unlike I did back then, I'm not down on myself as I used to be for being single. Feeling that without that significant other symbolized by the winged rose embracing the winged "L" representing me that I was less of a person. Truth is had it not been for my being single, I would have never discovered my predominately gay bisexuality. I would have been living the lie of being totally heterosexual. And since then, there have been so many things about myself that my time single has taught me about myself, like what I need to improve and dissolve in myself, and what I should and should not tolerate in relationships.

Sad truth is many out here refuse and/or haven't done the same. So they are living a lie in their relationships. And they use Valentine's Day to make all the gifts and cards be the biggest aid in their life of denying that their so-called life isn't working. Or for those that are single, Valentine's Day gives them more reason to escape using a sex tryst to numb the pain they feel for being single. And being single is frowned upon in so many cultures, and definitely by media and commercialism. So they create the illusion that they are spoken for by intimately laying with someone.

Some may call me cynical, or say how I of all people shouldn't talk. Well, truth be told, I don't use people for sex. Especially not in the way I'm speaking of here. Now I can't speak for my sex partners, but every person I have a sexual escapade with is someone I bonded with because I saw something beyond the attractive face and body. It might not be something to bond with for eternity, but it was something to make me want to bond my body with theirs in that moment. 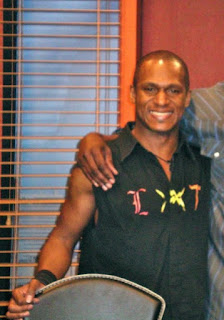 With my solace of my single life, I thought for Valentine Day that I should spread the word with a poem addressed to those who are living the escapist life I mentioned before, and urge them to seek better for themselves. And see the good in being single that I have, which prepares you to be better in choosing your next relationship, and maybe even playmate.

So with this poem I say
HAPPY VALENTINE'S DAY.
And love yourself to know who to let in, and who to put out.

No Valentine, And I'm Fine
Stare at the calendar
Singing "Whoa is me!"
As February 14th
Has you feeling lonely
Blind to the blessings of solitude
Letting it cut you like a knife
Instead of taking this time for an inner-view
Of what makes a true loving life
Your arm is a turnstile
Taking any desperado's grasp
Even more so on Valentine's Day
Making you coupled too wrong and too fast

I don't need to fuck
For the illusion
Or fuck my ex
Causing confusion
Lie to yourself all you want
That the other party understands
Ignoring you're dealing with the mixture
Of sex, lonely hearts, and man
Your bedroom has a revolving door
For the silence causes you strife
Never embracing the self-knowledge through silence
To undo your present tragic life

You want to assume my foul tongue
Is nothing more than a verbal mask
WRONG! It's my despise of weakness
Like your robotic bobble-head I’m putting on blast
Hanging onto lovers past and present
With whom you need to sever ties
Making yourself into the real liar
To the claim how your soul is alive 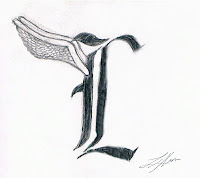 You see,
I ain't got no Valentine, and I'm fine
Media makes solo flight seem a crime
This is not a lie I'm hiding behind
Till love is real,
I don't want a Valentine
So if you're single, be worth a damn
Embrace this state of mind

Email ThisBlogThis!Share to TwitterShare to FacebookShare to Pinterest
Labels: Poetry