With June being Gay Pride Month, I felt it appropriate to make my CHALLENGER poetry series start getting in people's heads. Because the gay community as a whole needs to be challenged on correcting those things that are making us come off as hypocrites, and now is as good a time as any. So that by the time we do a Gay Pride March in NYC at the end of this month, we may have a reason to not only take pride in being gay, but also in correcting the things that separate us. Thereby strengthening the justification for our demands and the potency of our fight for equal rights. With racism possibly being THE main thing separating the LGBT community from within, it is a must that it becomes undone.

Due to some of the implications made by the poem and/or video, I've included a disclaimer with the video. Mainly because of the lines that imply a desire to burn the rainbow flag and Michael Lucas' face exploding, which was prompted by his constant arrogance in claiming how Blacks are the most homophobic, YET he hires Whites with internalized homophobia calling themselves "gay-for-pay" to be in his movies. I DO NOT condone violence, but these lines and images definitely show how I have grown tired of the excuses by not just the likes of him, but many heads of gay media - from magazines, video, movies, nightlife, etc.


So I hope the poem and video speak to you.
To those doing the shunning, GET IT TOGETHER!
And to those shunned, STAY STRONG as I LOVE YOU. 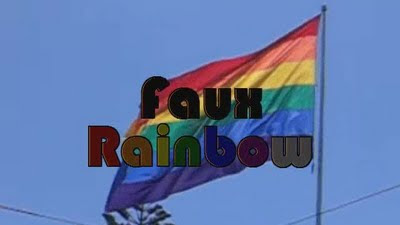 By treating me like an outsider
You induce dreams of seeing the flag on fire
The fact that I can even think this
Shows how much your actions are dire
For I am proud to be my gay self
So I don’t want to see the flag ablazed
But sometimes it seems the only way
To show ostracizing a man over color pays
For I have tried diplomacy
Yet, you persist on ignoring me
Until you want my body for your cause
But once won, it’s “Be silent! Get lost!”

Accuse my color of homophobia
As to why your numbers fall short
But it is YOU who is sick with a phobia
Exiling my intellect from your court
Over your fear that my shade of skin
Can be found smart, sexy and beautiful
If you tried embracing it in those ways
You’ll find your fight’s progression much more fruitful
And don’t play one of us as a token
A facade to say you have respect
Since us non-whites are equally great
Give us more than a little speck

Email ThisBlogThis!Share to TwitterShare to FacebookShare to Pinterest
Labels: CHALLENGER, On Racist Blast