Box Me In With BoyBox Men

This past Tuesday, I went to the debut of BoyBox at g Lounge here in NYC. I got there later than I planned. I wanted to see the 1st burlesque show at 11 PM. I was running so late that I decided to wait until I would arrive for the 1 AM show. It turns out that I got there and check my coat just in the nick of time.

I didn't even have a chance to get a drink, because knowing I wanted to get up front to see the dancers strut their stuff , I brought my camera along. The problem is it turns out, I left my camera in my coat pocket, so I had to go back and get it. Then as soon as I walked away from the coat check, an announcement was made that the show was about to start. 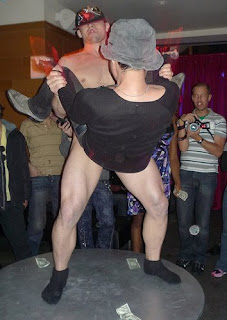 The 1st dancer was someone who I haven't seen in awhile, and they say "absence make the heart grow fonder". And they're not lying, because I have most certainly grown fonder of watching that hot bod go to work being that it has inspired some meat-beating sessions in the past. He goes by the name, "The Captain", and I must say while Aries like myself are not known for taking orders well, how ever he would want me to "serve" under him - with all the tricks he can do, his wish would most definitely be my command. 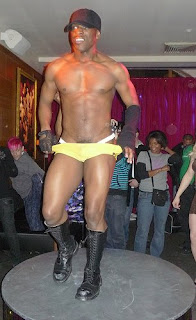 Next up was Onyx. The sight of him let me further know what I've been missing out on until recently by not having many other Black men on my list of lust objects. With that in mind, you would think that I would have more pictures. Well what happened there is that at one point while on the stage, he was facing me, he got down and came right to me. He started dancing with me, and all I could think was, "Where in the fuck do I put the camera!?", because I wanted both hands to feel on those muscles. Let me be honest, I mean "grope those muscles". Using just one hand does not do this man justice.

For whatever reason, while I was trying to watch and gain pics of Latino stud, Geronimo, people decided that where I was standing was either the perfect passageway, or that I was along the perfect route to get to the other side. I did get some good shots in, but he's such a hottie, I would to like to have gotten more. 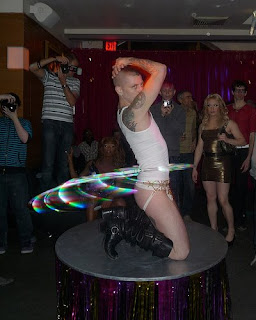 Well, I did get plenty of the final performer, Ferro. Beside his being tall and slim inspiring one lust, and his tattoos inspiring that kink of mine for guys with ink, I couldn't get enough of watching him with that lit-up hula-hoop. Yes, it's the hula-hoop that has these pics making me come off as some special effects wizard. I'm not that good a photog - yet.