Me and My Fleshjack - A Better View

At Daniel Nardicio's Pride party, "Cruising At The Trucks", there was a Fleshjack-Off Booth, where guys went in, masturbated using a Fleshjack and it was videotaped without showing your face. Now if you recall my Fleshlight video, you know I enjoyed myself. The Fleshlight I used was made like an anus. This one was made like a mouth. I was so horned up from all the playing I was doing before going to that booth, along with the cocks I saw shooting loads in the booth before me, I was about to shoot my load in like 2 minutes. So I had to pace myself. And for this video, I had to pace myself again, because those Fleshjack feel soooooooo good, it makes you eager to shoot your load, but you know it's way too soon.

Instead of telling you how I paced myself, why don't I show you. Since Blogger is giving me problems embedding the video, I gave you the link instead so you can see for yourself how I had to pace myself again, because those Fleshjacks feel sooooooo good, it makes you eager to shoot your load when you know it's way too soon. Since I now have a real video camera, instead of the webcam I used in my 1st video, I can show my pacing skills at work. Enjoy. 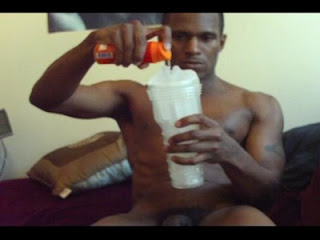 I hope you liked it, and I didn't get any on you. That is, unless you wanted me to.
Posted by LeNair Xavier at 5:38 AM