Evolution of My Bottoming 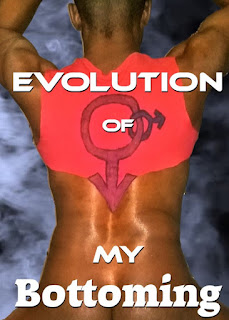 It's quite rare that I lie, but one of the few times I do is when I'm giving answers about myself that are lies at the time, but will actually be my truth in the future. So the reason I tell the lie is not out of an intent to lie, but because I can foresee that future so clearly that I refuse to verbalize how it is untrue at that present time.

With that said, as much as I hate to lie and being lied to, what I know of Michael Lucas and my own history of dealing with him makes me feel no regret about that lie.

Especially since a recent trip to CumUnion made that lie about myself back then finally become my truth today.

My French playmate pounded away at me, and I realized that my dick was semi-hard. That is not unusual when I bottom. But I am never compelled to jerk off. I'm always about enjoying the dick, and letting that be where all of my sexual pleasure comes from. This time, I decided to go for it. As soon as I started jerking off, I could feel my physical orgasm coming. In fact, it grew in me slowly getting me to the point of ejaculation. And when it happened, I thought, "Oh my God, it's happening! HOW is this happening???".

However, even with that heightened intensity, I still wanted my playmate to keep his dick sliding back and forth in my ass tunnel. He did. And with not one single request to stop from me.

I always wondered though that if and when I finally jerked off and came while bottoming if I was going to be one of those guys who once they orgasmed, would they end the sex. Thankfully, that was not the case.

This concerned me because as I have said before, if I'm getting good dick, I become an insatiable power bottom.

Keyword - INSATIABLE. Meaning keep going because their is no ending to this pleasure for me.

For I have always loved, loved, LOVED, LOVED  a hot guy's dick in my ass. Hating when the time comes that he has to take it out because life happens.

So I always feared a physical orgasm from my body's penile satisfaction while bottoming would make me go back on my word. Since the typical response to a male's penile orgasm includes an end to the sex. The mental orgasm I get knowing the pleasure my body is giving my sex partner allows the sex to continue.

We later sat cuddled together on the sofa upstairs. Just enjoying sharing a space with each other. I know it sounds romantic, even though it was a sex party. But that's the kind of energy I give off.

My sexual energy gives off my true view of sex - a physical and spiritual connection. Many gay males don't have the depth and/or maturity to handle that even at a sex party. If they're a top, their hard-ons are sparked by guys who they see as empty vessels to take their cock in. And if they're bottoms, they're holes widen for guys who they see as empty vessels who don't really care about in who they put their dicks. In any case, even if they talk to the person, such actions shows that they are drawn to someone who has less respect for their own humanity.

Anyway, we got so comfortable that neither one of us realized that we had both fallen asleep. We woke up because the party's host came upstairs to announce that the venue was preparing for Encore, the after-hours party held Fridays and Saturdays at Paddles. The host saw us on the sofa as he headed back downstairs. Teasing us by asking "When's the wedding?", because the last time my playmate was in New York, we met up at Paddles, and the host saw us cuddled together then as well. Like I said, I give off that kind of sexual energy, and a sweet few are deep and mature enough to embrace it.


Thinking back to last night's @CumUnion NYC hosted by @MilkNYC, and how skilled my playmate is at being the center of a fuck-train.

He finds his top's fuck-rhythm, then copies it, so I (as his bottom) feel that same rhythm, but with his dick.

However, the Black guy never took my playmate up on the invitation. So it was just me and my playmate once again. That re-energizing nap led to my playmate thrusting into my ass for what must have been about an hour or more in various parts of Paddles. Eventually, he came inside me. I could feel the throbs of his cock as he let out his load. This was when I went back to a mental orgasm. Because at no point during that entire hour (or more) of bottoming did I stroke my cock. I was so turned on by his body in me and on me that I needed nothing else to stimulate me.

In any case, I'm thinking back on the pleasure of both Acts I and II. Learning I can now get off by both a mental and physical orgasm. This leads to new sexual information about my bottoming that I didn't know before.

So now, there is versatility within my versatility. 😉
Posted by LeNair Xavier at 8:38 PM