For my first couple of years after my coming out to myself, I frequented the now-gone gay bar Splash, which is where I came out to myself. One night while dancing the night away by myself, this cute European male with a couple of female friends came onto the dancefloor. My peripheral vision caught the guy looking at me for a second, then again. I kept dancing, but my 6th sense felt I was being focused on by someone. That someone was him. Since I did find him extremely attractive, I returned the gaze, and held it to see where it would lead.

It led to him staring at me with his eyes getting wider and wider. Then he said, "Oh, my God! You are SEX! You're like... the whole thing!"

Bashful and flattered by the compliment, and not taking it seriously, I just laughed, said "Thank you", tried hiding my face into my chest, then continued dancing.

The point of that story is because I like being able to pass on to someone a compliment that has been bestowed upon me. And someone I feel the need to pass on such a compliment is Parker Marx. 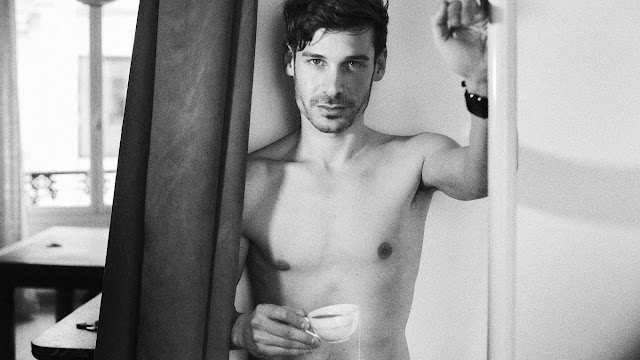 The 1st time I saw Parker Marx was in an Erika Lust scene, The BitchHiker. The moment I saw him I was struck with so much lust. Having no idea of the beauty of his body, his ass, or his cock, just his eyes alone made me feel he entered into my ass with just the tip. With every sound, word, and motion from him after being another thrust going deeper inside me to make me orgasm. And each twitch of my ass tunnel caused by watching him had me wishing it was doing it while wrapped around his cock. And being the ass man that I am, a fantasy of Parker Marx would not be complete without fantasizing about using my hands to worship his ass while my hole is worshiping his cock.

I'm sure I'm not alone in this. There's a reason Erika Lust has had him featured so many times, and other directors as well.

Now, before a gay reader has a fit about me lusting after a straight guy (which there is nothing wrong with), know that Parker Marx has also done gay porn....And showing there is no shame in his game, he is featured using that very same name. So there's even more reason to lust for him. For Parker Marx is a proudly sexual being.
Posted by LeNair Xavier at 12:33 PM

Email ThisBlogThis!Share to TwitterShare to FacebookShare to Pinterest
Labels: In Lust With