This one guy was making eyes with me from a distance at a bar. At first, I tried to avoid eye contact because I thought he was someone else. A drug addicted someone else from my past. Later on, he stood next to me at the bar to order a drink. This was the point where I realized that he wasn't who I dreaded him being. So I could now proceed further with seeing where this attraction would go.

In my usual observation to bar backrooms, I saw him. As I continued further, I saw him make out with a couple of guys, but this fat guy was the one who was about to have sex with him.

The fat guy was huffing on poppers. And like all guys dumb enough to use poppers as a crutch, once his dick got hard enough to enter him, in just a few thrusts, his dick started going limp. So he would fall out of the guy, then jerk himself to get hard so he could get back in the bottom. But this one time, it took so long that the fat guy backed up and out. This allowed the bottom to turn to me. Inviting me to do what our looks earlier showed we wanted....It was now my turn to fuck his ass. And I felt this was not a time to fuck bareback. For the thought of letting my precious cock touch the remnants of that poppered-up, limp-dick fucktard that was in him before me disgusted me. For this I say, thank goodness for condoms.

When the other guy had him, I could see the bottom's ass from a profile angle. This time, I could get the best view possible. From being behind him while thrusting in and out of him. So he stood up to turn my way, then once in front of me, he bent over again awaiting my hard cock's entry.

Just as my dick as starting to go soft from watching the popper-addict's struggle, this guy putting his ass in front of me was like taking a grade of Viagra that kicked into your system in less than 10 seconds, as opposed to the herbal supplement I recommend that take 20 - 45 minutes. Once I started sliding into him, he gave out a pleasure moan. I'm sure he moaned so loud because my dick was totally hard from the moment I entered him, and stayed that way, unlike the preceding top. And the moan intensified with each initial thrust. And like when a cowboy kicks the side of his horse to make it go faster, a squeeze of his sphincter and/or ass tunnel around my cock made me thrust even harder. To the point that even over the music, I could still hear the body slaps of my groin to his ass. And I'm sure he moaned so loud because my dick was totally hard and going in deep.

The way his ass looked when he bent over, with the sides curving nicely outward starting from his waist, going out until the lines reaches near the bottom, then they come towards each other, finally meeting by a slight turn inward ----what many call a "pear-shape". But being the deep-thinker that I am, I saw something different, and I saw it for a reason. I saw an object that was a perfect fit into that space, saying something about his mindset. In this guy's case, I saw an upside down heart. 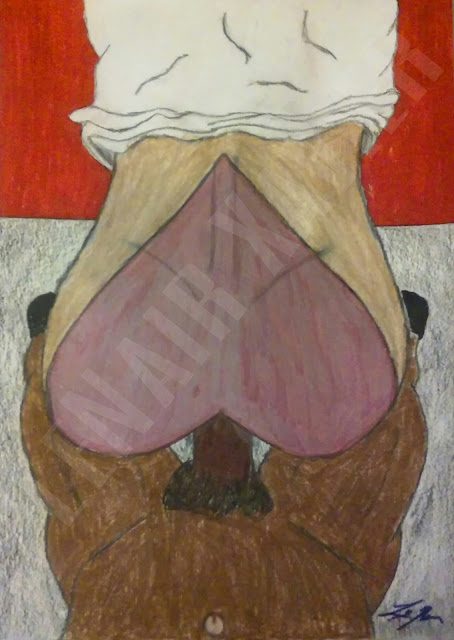 A heart usually symbolizes love. Maybe in the case of this guy, it was symbolizing his heart turned upside down by someone he was once involved with. Or maybe, for no recent circumstances, the upside-down heart I saw was saying nothing romantic at all. I began to feel that maybe regardless of his relationship status, that upside-down heart showed how he was about the opposite of love. And when it comes to sex, the opposite of love is not necessarily hate...In some ways, and to some degree, it's LUST.

And his lust for me practically never got denied. For that previously mentioned time was not our only go-around. We had a few. Each time, it was the same position of him bending over, but felt so good at the moment that it didn't get old. What was getting old was how his white shirt kept coming down over his ass with my every thrust. So I kept pulling the shirt up so it wouldn't block the view of the upside-down heart I imagined could fit on that shapely ass of his.

Regrettably, we didn't exchange numbers. Because as you can see from my drawing above, I can't get that ass out of my head just yet. And a smile comes across my face each time I think of it. So I see no problem with having another go-around....Or a few.
Posted by LeNair Xavier at 12:01 AM