From Daddy Issues To Cyber-Lynching

In various Facebook posts, I've talked about how some gay males daddy issues are manifested by sexualizing those daddy issues by persuing guys old enough to be their father. I have also said that I would be honest as to how I have my own daddy issues, male abandonment issues, namely. and that I would come forward and address those issues in greater detail. Telling how they came to manifest themselves in my own relationships.

Be it Danny, Toby, or most recently, Douglas Sanders, if it seemed that my talking about them bordered on obsession, there's a reason for it. 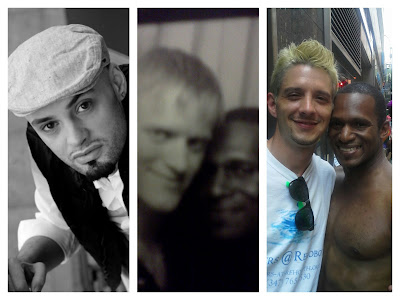 It's because unlike the other unnamed guys that I've been involved with, those aforementioned guys were failures because they did to me what my father did to my Mom.

They all laid the groundwork for something great to happen out of our time together, and when it became time to man-up, and up the ante on the directions our words, actions, and time spent together was heading, ...they bailed.

Danny laid the groundwork when he took my phone number at The (now thankfully closed) Roxy and called me a day or 2 later in the wee hours of the morning after he got off from work. Toby laid the groundwork when he propositioned me, didn't follow through, so he got rejected by me, but when given another chance, stepped his game up and didn't start following through by proving to be a self-destructive trouble-making drunk. And Douglas laid the groundwork when he invited me to attend his church, cooked for me the day before, let me spend the night in his bed that night and the night after going to his church, then after 4 months of wasting my time on my dime backpedaled because of his religious hypocrisy. Such actions should make it more understandable as to how I see my father's cowardice, therefore giving birth to the hatred I feel for these guys after giving so much of my emotional, mental, and creative self to them.

My cyber-lynching of these guys is how my daddy issues have manifested themselves. Now, these are not the only guys I've been involved with. I have blog posts and poems proving there are other guys. However, what made me part ways with those unnamed guys just warranted a poem or two (like "You Can Say Never"), or to be lumped into being the motivations for my vlog, "10 Reasons Why I Am Single".

I don't know how much (or if at all) Danny or Toby have improved from being the emotional cripples they were when I was involved with them. I do know that Douglas has not changed. And it should have made my latest tale of him disturbing to us all. For this crystal meth-smoking, popper-fried brained, sexually racist emotionally cripple coward of life is now allowed to officiate weddings and even worst...give people counseling???!!! All because the predominately black church in St, Andrews' Church's basement, Rivers NY is a fucked up enough dysfunction-enabling group to ordain him a minister, Like I said of them before, they're quick to take money, but if they were really on the up-and-up, Douglas would not have been ordained without getting extensive counseling himself to which my latest tale of him would not have been allowed. For that reason, it's a scary thought how many lives might be put in such self-loathing hands. And putting people on notice of that is what I am doing with those memory flashes of anger.

Now, some of the more stereotypical snarky gays reading this are probably saying, "That's why you can't keep no man. 'Cuz when things go wrong, you're go talk about 'em. So nobody wants to be bothered with you."

Well, what should I do? Stay quiet and enable their ignorance. When putting them on blast might be the wake-up call to make them straighten up and fly right. Plus, I've said it before, that if he is confident enough with the goodness of his heart, he will take that chance.

My point is that the same goes for any guy involving themselves with me. If he is truly confident and not misled of his worthwhile ethics by someone (like family, friends, job, or church group), then he will stand by all of his actions, instead of running from them. So even if things still go south, we can part ways with me respecting him, as I have actually had some amicable parting of the ways with some guys.

The answer is you can't respectfully part ways with them. Especially, when their behavior mimics that of a bad parent. Thereby making it all too understandable why one like myself is pushed to such extreme to vent as I have been over these guys. For even if you move on, as I have,...you will never forget.

Posted by LeNair Xavier at 6:06 PM