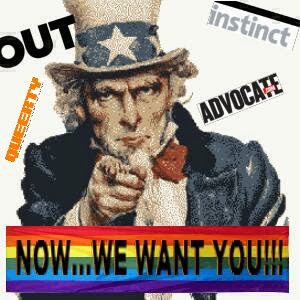 Gay media tries to imply that we should hate the religious right wing because when you don't agree with the religious right wing, they treat you as if your viewpoint is irrelevant, and eradicating you off the planet is an option. Doesn't gay media do the same thing? In 2014, gay media goes on witch-hunts like it's Salem, Massachusetts in 1692 looking for stories of gays oppressed. Yet do that same oppression within their own community, and to the straight community. Even when there is a bridge present. This is why this post is in the category of "Typical American Gay Male - His Own Worst Enemy". There are many examples I can use to make this point. So let me use these simple few.

For the longest time now, you have read of numerous blog posts of me promoting my appearances at the erotic open mic event' Titillating Tongues. And I have tried appealing to EVERY gay nightlife magazine I know of here in NYC (Next Magazine, Odyssey, and Get Out!) to try getting them to cover this event since it is pansexual, therefore gay-inclusive, therefore a bridge between communities of sexual orientation. For I find it ridiculous that I am often the sole gay voice in the room. But why have I yet to get a response, or even better, see such a story written as feature article? The most likely reason that I feel is safe to surmise is that it's not gay enough for them. For these magazines are littered with light faces doing nothing of depth. Either that, or making heroes out of heterosexual female music artists preying upon stereotypical gay desperation for validation. Yet when an artistic event that allows a bridge to form between the straight and gay communities is brought to their attention, they refuse to speak a word of it. It's like they live to wallow in the animosity, and refuse to show more depth to their prospective.

A perfect example of the bridge that can be created were the loud applause I got when I presented both "Blind Fuck Mind Fuck 5" at Titillating Tongues back in April, and most recently, "HIM" this past June. The audience, full of heterosexual artists and patrons gave a response that blew my mind. And it's not like I don't have proof. For the videos tell all. Those are not tracks of laughs, applause, and interjections edited in that you hear. They're 100% real. And the audience knew from my intro that I was telling a gay sexual fantasy. So why is this bridge not being taken advantage of? WHY?!

Did you know I have locked horns with Queerty so much over their shallow wannabe-journalists that they---have now blocked me from commenting. Sure, I can log in as a member. But they are so often on the negative stereotypical side that they've grown weary of me calling them out on it. So now, even on the rare occasion that I can agree with them, they have silenced me. Yet, when they allowed me to comment, Queerty allowed foul-mouthed and racially insensitive people to insult me with no punishment to those commenters. Does such a tactic sound EXACTLY like what the religious right wing would do? I believe so.

Queerty has recently went even further in their desperation to silence people who don't agree with their world. For in a recent article on their site, after 4 comments, they closed the comments. Comments were open on other posts, but not that one. What was so different about this post? 3 of the 4 comments in a nutshell bluntly said that Queerty was low on intellect. Nothing I haven't said a gazillion times before. So rather than single those individuals out by blocking them like they did me, they just closed the comments altogether. That only says to me that my individuality threatens them. So closing the comments was their Christian right wing-like attempt to make sure those other commenters don't become just as great a threat as me, or greater.

Well, after I called them out on this action by tagging them in a status update I wrote on Facebook, I checked back to see if the comments were still closed. They were not. I'm not necessarily saying it was because of me, but the timing is suspect.

What makes gay media and the religious right wing so similar is the fact that these are 2 sets of fools claiming to be different, but are actually 2 asswipes smudged from the same messy shithole. Yes, that's harsh, but I am justifiably frustrated and annoyed. The reason they think they're different is because they were done at different times. With the religious right wing forcing a need for gay media, but gay media failing the community it claims to stand for. Because both gay media and the religious right wing are worlds of complacency, segregation, and hypocrisy. Thriving on their followers to do what their rules say, and never show an ounce of humanity or individuality by asking questions. If you do ask questions, you will be deemed as "angry", a "bad seed", "someone who should be cast out", much like God cast out Satan from heaven. So both are wannabe-gods.

But the problem with this behavior is that not a single one of them, or us is God. So if someone is a member of that community, we have no right to thrown them out. Question their behavior if it's not for our betterment? Yes. But cast them out? No. Between gay media and the religious right wing, whoever comes to this realization first, that is when they will be different, and one will undoubtedly be better.

However, until that time comes around, they are both loud mouths. Using their noise to hide both their hypocrisy, misery from their complacency, and loneliness from their self-imposed segregation.
Posted by LeNair Xavier at 8:25 AM