The "Are You Clean?" Challenge

It has been 12 years since I came out to myself and have been sexually active. And one question that has bothered me for damn near all of those 12 years is the question, "Are you clean?"

My annoyance with this question started with my sexual encounter that I told in a blog post I wrote for Men of Color Blog 3 years ago entitled "Solving Enigmas From The Stigma". Since that incident happened back in 2003, that means that I've been carrying around this annoyance without publicly addressing it for over a decade now. 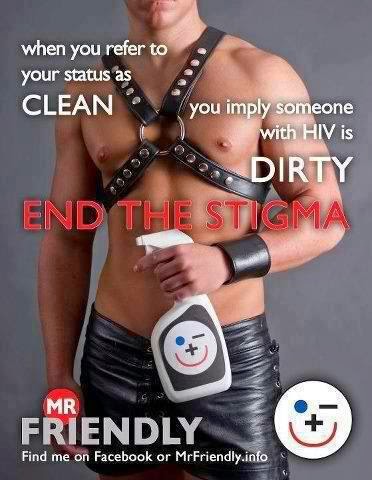 What makes me feel the need to address it now is because of the disrespect I feel when asked that question. My feeling is that whether you are HIV- or HIV+, if someone asks you, "Are you clean?", as long as you have done the 3 S's (shit, showered, and shaved), then you have every right to answer with a "yes", and should feel no shame about it. For if they can disrespectfully word a question, they don't deserve the answer they are actually fishing for so they can claim a false sense of sexual superiority.

I've come to realize, especially at this point in this stage of HIV's history, if you are using condom, there is no need to even ask someone's HIV/STI status. It's like if 2 straight people hook-up, if there's to be condom use, a woman doesn't ask a man if he has sperm in his semen, a man doesn't ask a woman if she has eggs, and neither ask "Are you clean?". Why? Because the need to ask those questions were alleviated when the 2 of them decided to use a condom, and/or some other contraception. So if any such question is asked, then they shouldn't be fucking. And the same goes for a gay male. So for gay males to do so is another way where we become our own worst enemy. It says that we're so self-loathing that we see ourselves as the diseased freaks the conservative right wing has made us out to be. Furthermore, the idea of questioning status among casual sex partners was initiated when not as much was known about HIV, nor was it at its present level of being treatable. So to ask the question of status today is not for peace of mind. It's because our society has not evolved with the changing, but improving facts of HIV. Therefore, HIV+ people are still branded with a "scarlet letter". So people are looking for that aforementioned false sense of sexual superiority.

Also, while some are not using the word "clean" to mean HIV-, but instead using it to mean "STI-free", it makes no difference. You are still on that same search for fake sexual superiority.

With all that said, I am including myself in those guilty parties back in 2003 in the hook-up from "Solving Enigmas From The Stigma". I had 100% intention of using a condom like I actually did anyway. So there was no reason for me to even ask him his status. My asking was not to seek a feeling of superiority. It was instead out of my own selfish curiosity of coming face-to-face with an HIV+ person, which in a way made him a social guinea pig for my personal experiment. But I was new to the art of hooking up at the time, and have since matured. So for that, if I could see him today, or if he's reading this, I wholeheartedly apologize.

Why did I say "disrespectful wording" earlier? It's because that's exactly what it is. For let's examine who usually uses the word "clean" to mean HIV- and/or STI-free:

a)people with racial hang-ups;
b)who do drugs, but if HIV-, have been lucky thus far;
c)alcoholics;
d)people whose claimed sexual taste are based on porn-induced age and racial roles;
e)someone who is possibly married, therefore cheating.
and the most common of them all,
f)someone you meet for a hook-up at a bar/club, sex party, online, or for some other outing for that becomes a one-night stand who easily for no good reason, acts like the sex never happened;

And the list of fucked-up mindsets goes on and on. My point is...that while you may be HIV-, while you may be STI-free, calling yourself "clean" does not compensate for the fact that because of you practicing one or more of those things that make you call a guy "clean", your soul obviously is NOT clean. So the words "Are you clean?" is a means for such HIV- guys to feel a false sense of sexual superiority when they actually are not only no better, but may actually be worse due to a void in their humanity. For sex, and your mind are very much intertwined. That's why it has long been said that the brain is the greatest sex organ.

Let me be clear, that a one-night stand does not have to become a date. However, unless you accept that downtrodden logic that says "that's what men do", you'll never realize that any person who dismisses you without reason after they've shared their body with you has that massive void in their humanity. And I say this as someone who has some of the guys I've written sexcapade blog posts about still on my Facebook friends list, and still chat with from time to time.

Now, back to the original point of this post. Those still desperate to feel sexually superior and hate on HIV+ people have completely ignored what I said in the beginning of this post of how long I've felt this way, and will try twisting my viewpoint to mean that it I at some point became HIV+ as well. Well, considering how my position on this matter started with me as a newly sexually active HIV- person, whether or not I've maintained that HIV- status is relevant only to my suitor(s), but irrelevant to you. For if I am HIV-, then that means I have a degree of compassion that makes me more humane than you. And if I am HIV+, then that means I'm now in a position to practice publicly what I've preached privately for over a decade. So either way, I have nothing to be ashamed of. But since being "superior" is your goal by using the phrase "are you clean?", you however are still a total failure at being superior, regardless.

There is so much in-fighting within the gay community that needs to stop. If it's not ageism, it's racism, and if it's not racism, it's sexism. All of it makes our community as a whole continue the chain of oppression started from the conservative right wing for centuries. Well, we need to catch up with the times, and give one another the love and acceptance that gay media keeps demanding from the conservative right wing.

In short, again I say,...PRACTICE WHAT WE PREACH...Don't you think?
Posted by LeNair Xavier at 9:59 AM