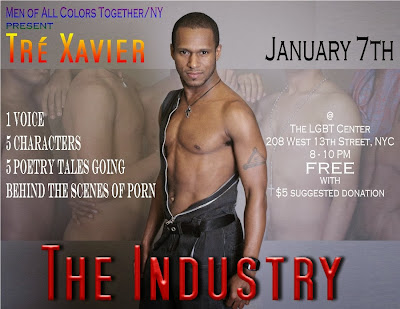 Before his untimely death, the host of the sex party, Hot Jock Party helped to promote my event by including mention of it in his emails. I was a regular, and I did attend last party held before my event. I recall telling the clothes check guy about it, him saying how great an idea it was, as well as him saying, "Something good is going to come out of that. You watch."

On the outside, I smiled and said, "Why thank you!". But while hoping for the best, but expecting the worst, my inside voice was saying to him, "You've got to be out of your damn mind! Ain't shit going to come of this!"

Well, fast forward to the morning of January 8, 2011, the day after "The Industry" debuts. I wake up around 10 a.m. checking emails with no expectations in my post wake-up haze. Turns out I did have new email. The 1st email being from someone who attended my poetry reading.

He complimented me on my poetry. He also complimented me no how I handled myself during the Q & A. Both compliments I greatly appreciated, but more so the latter compliment because there were a couple of argumentative dumb-asses there besides Diesel Washington. So being praised on handling them said that I did something right. But in addition to these compliments came him mentioning certain positions that he held, and how he would be willing to assist in my involvement. Such as being involved in with the Leslie-Lohman Museum of Gay & Lesbian Art, as well as The Rainbow Book Fair. Reading this began taking me out of my post wake-up haze. As well as realize that the clothes check guy at that sex party was foreseeing the future. For this is for starters, how I got to meet staffers at the Leslie-Lohman, and how I've been one of the many poets reading in The Rainbow Book Fair's Poetry Salon since March 2011. 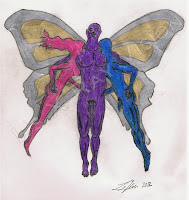 So it is this audience member's kindness that got me involved in those and some of the other things you have read about my involvement in over the past 3 years. Such as my modeling for the Leslie-Lohman Drawing Studio, my bartending at Leslie-Lohman openings (which led to a modeling gig), and my drawing "Bi-Butterfly" being in the Leslie-Lohman exhibit, "Queer Art and the Church". 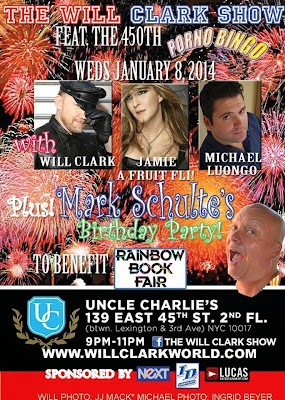 Now, this gentleman made me aware of the Leslie-Lohman, but he played no part in that drawing being displayed. For when he saw me at the exhibit opening, he though I was just being another art connoisseur. He was actually surprised to see that I actually submitted a piece. However, with such good deeds in mind, it is understandable that I feel that January 8th is a day to remember. So this coming Wednesday, January 8th, with The Rainbow Book Fair as the beneficiary of the night at The Will Clark Show featuring Porno Bingo, then I should be there to show my support.

Most artists' success starts from them being honest and facing bad occurrences  and calling themselves out on bad decisions. Sometimes telling that truth turns into a financial success. Though it is always most importantly, both a mental and emotional success that brings tranquility. And presenting "The Industry" was definitely a mental and emotional success bringing me tranquility. So I'm glad to celebrate its anniversary by attending an event that benefits a good thing that resulted from it. If you're in NYC, I hope you'll stop by and show your support.
Posted by LeNair Xavier at 5:55 PM

Email ThisBlogThis!Share to TwitterShare to FacebookShare to Pinterest
Labels: LeNair Xavier, Note of THANKS, Promotion