As said in a post from last year, I submitted a drawing to the open submissions for Leslie-Lohman Museum of Gay & Lesbian Art's exhibit, "Uncensored: Queer Art and The Church". I knew that my drawing would be a rarity by dealing with bisexuality, since biphobia is quite rampant in not just the gay community, but for American attitudes towards sexuality in general. Which is quite ironic and hypocritical since the purpose of the exhibit was to "flip the bird" to attitudes towards sexuality by the church.

What I didn't know was how rampant it was until I recently presented this poem inspired by the drawing at Titillating Tongues. It created the most lukewarm applause I had ever received. The only time I received a less enthused applause was when I was the first to take to the stage, which is understandable. But that was not the case here. I was somewhere between being the 5th or 8th presenter. 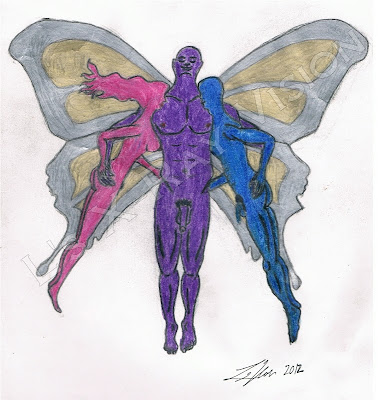 So with such an experience, why insist on presenting this poem here. Because this poem tells:
1) my bisexual fantasy; as well as 2) my bisexual truth; and 3) the truth of other bisexuals as well. Even those who have yet to come out because they don't want to deal with prejudice in some other form, like I faced that night through applause.

The hot pink of a woman’s vagina
Shows the color of flesh covered by her skin
It’s the blood rushing throughout her body
From a heat starting from within
Her clit, her nips, and all of her lips
Swell as they crave my touch and entry
Admiration of this sexual beauty
Is how the human race has thrived for centuries
Tonight as I take flight
I’ll hold her close with only my right hand
Since she is not my only pleasure passenger
I hope she understands

Sexy royal blue man held by my left hand
He is the other passenger on this ride
You would think he’s being a gentleman
Saying, “Ladies first” of who gets me inside
But it’s his plan to have my cock drenched by her pussy juice
Which he wants when I dip in him next
His main goal is to be the cause of my cum explosion
And feel the throbs that concludes the sex
I don’t begrudge his plan
If I wanted to play “catcher”, I would do the same
But tonight I am determined to pitch
And the beauty of his ass is to blame

You are flying with a Bi-Butterfly
And I want you both tonight
Shielded by my wings of gold and silver
From the world’s scrutiny of our flight
The light of the sun, moon, and stars
Glowing around and through my wings
Making us free to play day or night
And any time in between
There is no confusion, no lies
This openness is what makes a Bi-Butterfly fly

Posted by LeNair Xavier at 3:25 PM