It has been repeated all over the gay "news" websites that the NYC gay bar,

However, that is not the case. For that was then. Now tells a very different story that as usual, I'm going to be the one blogger honest enough to tell it like it is.

At first, I thought I saw at Splash Bar a racial acceptance that made me feel anything was possible for me. My black was seen as beautiful. Enough to make Splash Bar a place I could go to and without effort, get propositioned and/or find myself in a one-night stand, or even date. Hence how I met the 1st guy I dated after coming out to myself, Alfonso. But in just a few short years, even after going to Splash sporadically, my sexual propositions there came more and more from non-Americans, such as the Frenchman and Swedes I mentioned earlier. Meanwhile, advances from Americans became practically non-existent, except on a Blatino night. And that was usually by Black guys who looked like they just came out of an ethnic porn video, which is not my type at all. Not even a one-night stand.

The seed of racism in our community was always there growing. However, all of the incidents in the 1st 4 sentences of the previous paragraph blinded me to it. For from my first night there, I've only seen about 2 Black guys ever win Splash's Stud Search contest. Keep in mind that I've been out for 11 years now, and frequented Splash quite a bit in those 1st few years. Plus, one of those 2 guys was me just a couple of years ago. And I'm sure the only reason I won was because the light-complexioned Latino who while wearing boxers (not boxer-briefs) got louder applause and catcalls than me, dropped out of the competition. 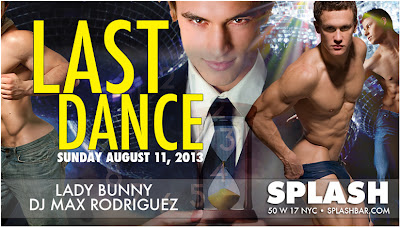 Later on however, Splash's patronage and party promoters brought to my cultural and ethnic mecca of a hometown guys who packed in their baggage from their in-breeding hometown's racism where they wanted to live by the "White or light like me" mentality. The problem with this is that Splash along with a great many other places throughout the city accommodated this mindset. This bad pattern in gay nightlife might have started in other places, but because of my history there, Splash was my go-to place. So it's where my eyes were opened. First positively with my sexual awakening, but then negatively to the racism in the LGBT community.

Some are quick to blame phone apps and websites for bar closings. I don't believe that's necessarily so. For a great many people who are looking instead of letting life happen are alcohol and drug abusers, so they need a place like Splash, or any other bar/club to congregate. And a phone app or hook-up website is not going to cure that addiction and desperation. Plus, since misery loves company, these people need the company of many around them to soak up negative energy from their guilt and self-loathing. 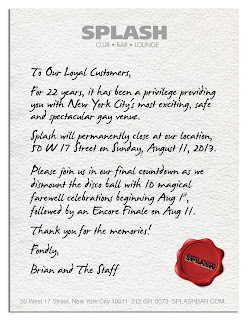 Now you see why my bidding Splash farewell, along with some fond memories includes a bad percentage of "good riddance" mixed in. Well, that beats the hypocrisy of those who are flooding their Facebook pages and Twitter feeds about how sad it is that Splash is closing, but haven't been there in God knows how long for one reason or another. At least I'm keeping it real.

So so long Splash. It was a good run.
Posted by LeNair Xavier at 2:29 PM