The next Titillating Tongues is August 16th. So if you're in NYC, the following is what I plan on debuting and using erotica to address:

For awhile now, I have had a sexual fantasy about how to cure a lot of social angst, hypocrisy, repression, and judgment towards sexuality, as well as do away with the crabbiness we sometimes encounter from people, or see in ourselves because we are sexually tense. And with my vivid imagination, I think I found a solution....

What if we all had sex at the same time?


With that crazy idea came the poem,

This poem addresses everything from how crazy it seems for an alarm going off and everybody fucks, why it could cure a lot of social woes involving sexuality. The poem also tells how as with all feel-good things, there must be some limitations put in play. I was very careful to revealed all of those concerns, no matter how crazy and fascist they might seem. The key to this fantasy is....we all get off.


Another piece I am contemplating debuting at Titillating Tongues I might save for Mike Geffner's open mic event on Tuesday evenings. Because it's a poem/song that is more social commentary than erotica with sensuality put in. For it addresses the sexual racism I've seen in some of my outings that I'm sure is not just on the gay scene, but in straight society as well.

There are non-Blacks who have sex with Blacks, but when it comes to dating, they would never fathom the idea of dating a Black person. The reason why is because they don't want to upset their racist friends who shouldn't be their friends, or family who threaten to disown them for dating a Black person. When in actuality, if they were really worth a damn, for having such a racist attitude, if not disown, the person would most definitely distance themselves from that so-called family to some degree. Even if later on, the love of their life turns out being a color their racist relatives approve of. That racism shown before should plant a seed of distrust towards those friends and family members.

FYI - I am also talking to you non-Blacks who have propositioned me for sex with that intention. Therefore, that includes those of you where knowledge of that intention escaped me, so that proposition actually led to sex.

Well, by the end of this poem/song, it will be made clear how Karma always makes you pay for such cowardice.

What sometimes happens at Titillating Tongues is that if the list is not filled up, then previous presenters are allowed to go up again. And since doing both of these pieces in one set takes me over the allotted time, I'm reserving "Fearing Chocolate" for if I get a second chance to take to the stage. Otherwise, I'll present it at Mike Geffner's open mic event at Bareburger. Hopefully, the following Tuesday. So if you miss hearing this poem at

,
then try to find me at 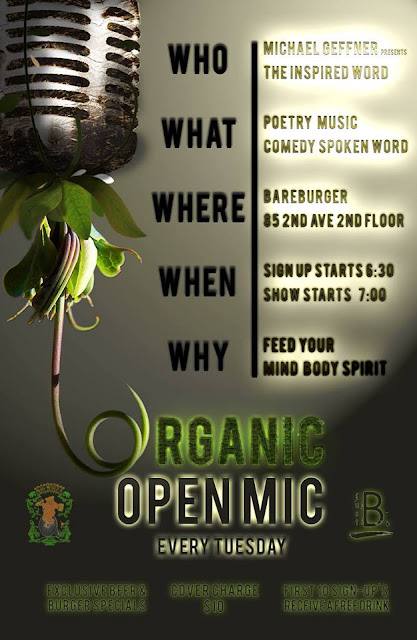 Posted by LeNair Xavier at 7:48 PM