Enter Me, Enter You 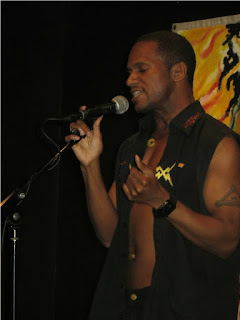 This past Friday, I did as promoted here and took part in the open mic at Titillating Tongues. I also stated in that promotion post what original selections of mine that I would be doing. One of them was an a cappella song entitled, "Enter Me, Enter You".

"Enter Me, Enter You" was written as a happy ending to the poem I posted about a week ago addressing the drug use during sex play that seems rampant in the gay community. That poem was entitled, "Run From The Fun".

Once I arrived to the venue, I was told that because of another event at the venue, only acoustic music would be allowed in our part. Since my song is a cappella, I hoped that would not be a problem for me. Wrong. For it meant my CD with the a cappella background vocals and finger-snaps could not be played. So I had to improvise by having the audience snap along to the rhythm I started of. There was no need for a tantrum on my part. For I just sucked it up to the fact that such curve-balls build character as a performer. Making you better equipped to handle things when all doesn't go according to plan.


So this video is not of that performance. That video should be coming soon. Instead, the video below is one I quickly made up to show you what the song is really supposed to sound like. So please enjoy. :-)
Posted by LeNair Xavier at 4:10 PM