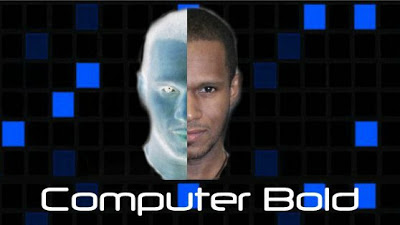 Have you gotten "Anonymous" replies to a comment you've written on a blog? Do you have profiles on various sites (like Facebook and MySpace, even YouTube, Vimeo, and dare I say Xtube) and seen your words, art, and uploads criticized with hate-speak by some faceless profile with nothing of their own to show to back up their critique? Have you had arguments and/or break-ups via text message or email, instead of face-to-face or voice-to-voice? OR have you been the person to do these things?

Well, I submitted a definition to the Urban Dictionary that was accepted soon after to describe the "bravery" of such people. The term is called "computer bold", and it reads:

However, the idea of being computer bold is no limited to just communications through your PC, Mac, laptop, or tablet. For as the last aforementioned question shows, it also entails text messaging on cell phones.

Well, I have written a poem to accompany the term I made that sums it all up. And also made a video. In the video, I'm aware that the section addressing text messaging seems to drag. The fact is I did that purposely to show how much more work it takes to be a coward addressing someone by text message instead of actually facing them in person or by voice, and owning up to whatever reaction from them your words may incite. So yes, the section drags. But considering the point it makes, it drags for a very good reason.


So with that slow spot explain beforehand, without further ado, please take note of the video for "Computer Bold":
And just think, that texting section would have taken almost twice as long if I had totally typed it. And I'm actually a good typist, even on a Qwerty keyboard.