Last week, I posted that I was debuting a new poem at a Titillating Tongues open mic this coming Tuesday night. Unfortunately, that event has been cancelled, hence the removal of that blog post.

Through animated gifs, I gave a clue of what the topic of the poem was. If you haven't figured it out, the poem addresses the drug use in the gay community. I will debut the poem and also a song to accompany it to make it a complete story at some point. Maybe here, maybe at the rescheduled Titillating Tongues, or maybe at some other open mic night.

Anyway, anyone who knows me personally, or has read this blog for any length of time, knows of my experiences with drug abusers, alcoholics, my own experimentation, and how it all has now led me to keep such people at a distance. And if they are allowed in my circle on any intimate level, they are just a rare fuck-buddy at best.

Add to that how I'm still remembering the guy I was dating a few weeks ago whom another more explained backstory and poem you should be on the lookout for. Because he took issue with my being so open about sexuality.

All this combined made me come to realize why neither of these kinds of guys are man enough to be in my life for the long haul. With that said, it's been awhile, but my latest "Write That Down" quote reads: 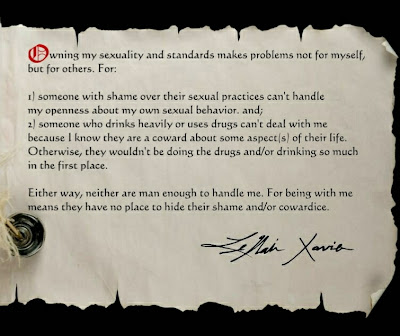 For those who can't read it or enlarge it, it says:

Owning my sexuality and standards makes problems not for myself, but for others. For:

1) someone with shame over their sexual practices can't handle my openness about my sexual behavior. And;
2) someone who drinks heavily or uses drugs can't deal with me because I know they are a coward about some aspect(s) of their life. Otherwise, they wouldn't be doing the drugs and/or drinking so much in the first place.

Either way, neither are man enough to handle me. For being with me means they have no place to hide their shame and/or cowardice.

Email ThisBlogThis!Share to TwitterShare to FacebookShare to Pinterest
Labels: Write That Down