F**king It Deep In Here

A few months ago, I made contact with a cute little Latino bottom online. We kept trying to get together to no avail. Then one night as I was going to attend a Hot Milk sex party, I hit him up to see if he was free, and if so, invited him to attend. He wasn't sure if he could make it. But as it turned out, he showed up at the party after all. We played there, but not without the often unwanted hands touching on both of us. Not good since it made me lose my hard-on, which of course is no good for a guy topping. Since then, we have tried to get together, but the scheduling conflicts arose again on both our parts. So when I recently got a text from him wanting to plan some fun on an afternoon that I just happened to be free, needless to say I wanted to get some 1-on-1 time before considering accommodating his insatiable booty, and maybe making it into a tag-team or gangbang scenario.

When he texted me, my initial thought was to suggest recording it. I even set up my webcam for it. But I never suggested any of that. I instead decided to just bask in the fun, and have it as a good memory. So imagine my delight when after about more than 30 minutes of various positions of me alone fucking his hot ass and him fucking only my dick, he suggested taking a picture of it.

Since I don't have that kind of equipment, I just turned on the webcam, decided to get a screencap later, and went back to fucking his ass and him fucking my dick. But at least there is no sexual denial, no sexual hypocrisy, no sexual shame, no sexual degradation of partners in this video. So it wasn't like the videos from Corbin Fisher, Sean Cody, Cocky Boys, Men.com, BigDaddy.com, etc. Videos that dumb-asses are paying money for just to hear time-wasting yapping and oral play that lead to 50% or less of the video showing assess and dicks getting fucked. This video gives you anal sex from the moment you press "PLAY":

Because in this video: 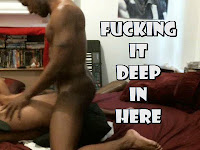 So with all that, I hope you enjoyed the video. And have your own fun void of sexual denial, degradation, hypocrisy, or shame. ;-)
Posted by LeNair Xavier at 11:35 AM