You Can Say Never

This past Labor Day, I reconnected with someone I had talked to online. This led to 3-weeks of dating that I am now quite annoyed to have invested my time in.

What was wrong? In short, he was 3 things in someone I'm against being with.
Pretentious. Hypocritical. Stereotypical of his race.

How so is explained after the poem, thereby explains some lines you might find troubling or not quite get.

For one's past can lead to the roads and standards that take us to our present. Therefore, we must not run from them, but instead embrace them, whether they are flawed judgments on our part or not.

Hypocritical
If it's one thing I loath to be in the presence of, it's hypocrisy. And the downward slope with this guy continued when one of our talks resulted in him saying to me, "I'm a good guy. I'm a wholesome guy."

With this I wanted to scream, "YOU FUCKIN' HYPOCRITE!!!"

For my tight-as-a drum memory immediately went to how during sex, his dirty talk consisting of asking me if I like taking his "big white dick", when for me, it's not about taking his "big white dick". Instead, for me, it's about simply taking "his dick", regardless of color or ethnic origin. I also recalled one conversation of him mentioning how he partied and wound up at the sex party space that I'm proud to have been banned from. People who are truly "wholesome" don't do such things.

Now, if you were wondering why I posted this Facebook status update on October 14th, now you know: 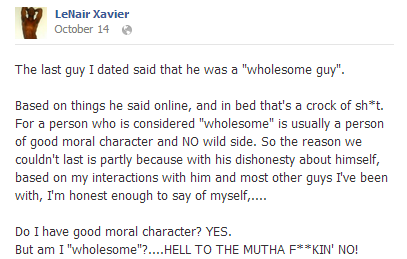 Normally, I wouldn't tell this much personal business of someone I'm dating. Even with all my talk about sex, intimate details of my relationship partner would not so easily be put on display for all to read. But as you can see for me thus far, and with the following point, lines were crossed. That's why he was someone I was dating - past tense. So now, my self-imposed confidentiality clause due to courtship (then relationship) is null and void.

Stereotypical of his race
Now, this point explains mainly the 2nd stanza, and if you're close-minded to what I have to say already, it will offend you. Anyway, depending upon your race and ethnic background, there is a way of thinking taught to us that gives way to stereotypes. Such as White American culture teaches to be more book-smart, while Black American culture teaches to be more street-smart, meanwhile Asian, Latino, and other cultures teach that in coming to America to be submissive to Whites, etc. I personally have no interest in anyone Black, White, Asian, Latino, Middle Eastern, etc. who lives a life governed heavily by these rules of their racial/ethnic cultures. There is a middle ground for all of these thought processes, and that is what I try my best to live by. And the fact that few others do is not only the reason why I'm single, but also why I have a small group of people I call "true friends".

Anyway, in regards to this guy, his thinking was too stereotypical of White culture. And while I was brought up with Black culture, my entire family for generations has been taught to find the middle ground. Hence why we all excel to the praise (and chagrin) of many with whatever we're meant to do. But he expected otherwise of me because of his Midwestern White American upbringing.

A stereotypical White American is intimidated by a Black person, or any person of color showing book-smart intelligence. It's the reason why Blacks who show any book-smart intellect are not placed front and center in the media (gay media more than mainstream media is notorious for this). So these kinds of Whites repeatedly try to one-up you since as a Black person, you're not sticking to "the program" of being all about your "street-smarts". You're a Black person that took the time to empower yourself more so by listening and reading as well. And while they say they applaud you, to the stereotypical White American, that wider spectrum of knowledge is scary. Hence this guy's lack of support for my blogging insinuating that my venting helps no one, as well as his constant need to unnecessarily edit my correct words. Even though he said that he has an "infatuation with guys from the other side of the tracks". His exact words, I am not even paraphrasing.

At first I paid that statement no mind. But now, looking back on his condescending behavior, I now take great offense to that. Because YES, I'm Black. YES, I'm from the ghetto. And YES, I'm come from stereotypical things. But look how I've made myself NOT be so obvious of that. But meanwhile, his pretentiousness, his hypocrisy, and his sexual shame is more than a tad indicative of the stereotype of where he comes from.

You all know me to be well-spoken. That's why some of you have been such loyal readers over my years of blogging. So if you haven't already, by now you understand my annoyance that led to the above poem and its title.


With all of this, in our parting phone conversation, 2 things I recalled saying to him:
1) that if he wants to continue his "infatuation with guys from the other side of the tracks", that he needs to not talk to them like they're stupid. And
2) A question that he should have asked himself before trying to pursue a relationship with me. That question being: What if I tried staying with him, became successful with what I'm trying to accomplish by being sexually open, how would he feel? And not just more successful by way of notoriety, because I already surpass him that way. But financially more successful as well.

His response was, "More power to ya."

From a male perspective, we know that's another crock of shit said like a politician to avoid the truth. Because any male knows that it's hard enough on the male ego to have a significant other surpassing you in their happiness in their job path. It's even worse when you add to that a better financial state. And worst of all is when you add to those 2 variables how it's by way of doing something you don't even support. This would breed the relationship-killing emotions of envy and resentment.

So with all that in mind, am I pissed? I think the poem more than shows ABSO-FUCKIN-LUTELY!

However, not just at him. But also at myself. For giving that much of my time, and even my body to someone like that. For someone like this needs to be left alone so that they finally get their wake-up call. Before someone comes along who doesn't use poetry as their release to stay sane as I do, and responds to his ways in a more violent fashion.

And with hopes of him getting that wake up call, I am sending this to him. Now, whether or not he reads it, and takes heed of it,...that's on him.
Posted by LeNair Xavier at 2:10 AM

Email ThisBlogThis!Share to TwitterShare to FacebookShare to Pinterest
Labels: On Racist Blast, Poetry, Provoked Re-Iterations, Prudish America, Why You're Single