Tuesday afternoon I tuned into The Tyra Banks Show having no idea what the topic of the day was. I discovered that a big part of it was about gay teens being ostracized by adult superiors.

Growing up in a religious household, I definitely identified with the young male, Calvin, who claimed to go to a ministry that 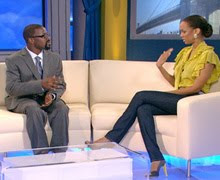 performed an exorcism so that he would no longer be gay. I never went to the extent of trying to be exorcised of a demon, but after all the times I have mentioned my coming out process, you may recall my years of contemplating suicide. The couple heading the ministry claiming to be a "prophet" and an "overseer" troubled me immensely. I knew I was going to either write a comment on TyraShow.com for everyone to see, or email the show directly with my feelings.

Realizing how Calvin is in some way me in my teenage years, I knew I had to say something. Give some testament as to how I understand his pain, and he won't truly be a man until he lives for himself knowing God STILL loves him. So with a lump in my throat, I went to TyraShow.com to the page where you can give viewer comments and possibly be on the show, and started reliving my history with this message:

It just would not feel right to me if I didn't comment on yesterday's show with that couple claiming to perform exorcisms on that gay teenager.

I saw my younger self in that 16 year-old young man, and it broke my heart. I grew up in a religious household where it was discovered in my elementary school years that I had sexual feelings towards both females and males. But the feelings towards males was more dominant. I was told by my mother THEN that if I had sex with a man I would immediately go to hell. This led me to have a far from normal social life for a teenager. I had friends, but never let them get a normal degree of close. Nor did I date. And when the slightest thing went wrong in my life, I contemplated suicide. This went on for all those years from my teen years until my coming to terms with my sexuality. I was 7 weeks from turning 31, and I realized that I STILL did not know my sexual orientation. So I went to put myself out in the social scene to find out. Just so you know, before this I was a virgin - no sex with women or men.

Enough about me. My concern is the young man, I believe his name was Calvin. Calvin went to that couple because the same fear that was instilled in me was instilled in him. He's only 16, so he's fearing getting kicked out of his home, he's fearing being ostracized. Calvin was hurting from those fears, and that couple took advantage of that and shoved their own beliefs down his throat. And no matter what they tell you, it was for the sake of stroking their own ego. Which I'm sure will cause more hurt to Calvin in the long run if he doesn't realize that he's not choosing his own path. If you can somehow pass the message along to Calvin that he will TRULY be loved and respected for being true to himself. If he keeps up the facade, the love he thinks he is giving and receiving will never be real. Thank you.

I hope my message does reach Calvin, and that others feel the need to send him the same message of loving himself before the effects of what that ministry did takes such a hold on him that he will never be free to be. And if that results in something like Calvin committing suicide, or becoming a molester, that is blood on that ministry's hands, but you know they will never own up to. So I hope these messages save him before it's too late.
Posted by LeNair Xavier at 12:01 AM